Those first-mile options are intended to show people multiple ways where they can get from their starting location to public transit to start their commute. This new feature sounds very much like last-mile service that shows users how they can get from places like the train station to their final destination. Google Maps is also gearing up to give users more insights into ride fares with Uber. The mapping service would link to a ride sharing service and share the user's route giving them access to accurate ride fares within the Google Maps app. 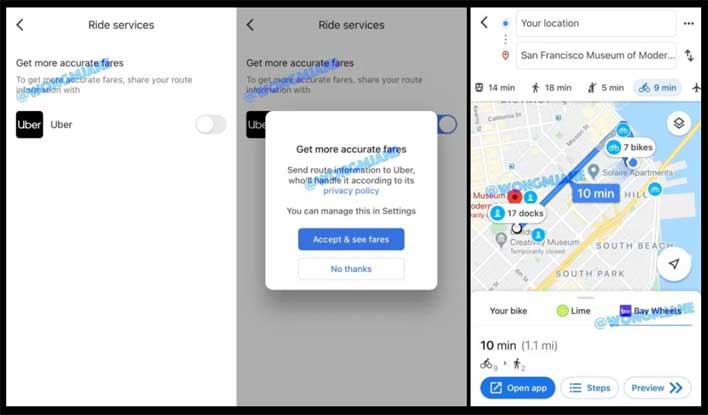 Maps is working on integrating with "Bay Wheels," which is a bike-sharing service in San Francisco. That integration shows the number of bikes at the beginning of a route and the number of docks at the end of the journey to leave the bike when finished. UI changes coming to the app include a rounded search bar at the top with the user profile icon on the right-hand side and the Google Maps logo located on the left.

Google Maps is working on route options with “Connections to Public Transit”, such as:

Some "place" cards are also being changed to include common words mentioned in reviews of the location. These features were shared by Jane Wong via Twitter. She didn't give any indication of when these features might show up for users or if they'll land for both Android and iOS users at the same time. Google Maps continues to be one of the most popular navigation services out there for smartphone users. Earlier this year, Google Maps users discovered that they could, at times, find pictures of deceased loved ones using Google Street View, and many of those images went viral.