Google's Gmail Is Getting A Major Overhaul With Better Feature Integration

It has been over 16 years since Google first introduced Gmail, which remain in beta for several years. The overall Gmail experience has changed quite a bit since then (as has the web as a whole), and will continue to evolve with the times. In fact, the version of Gmail available to Android users is getting redesign, with some features already trickling out.
The big additions to Gmail on Android are Google Chat and Google Meet. Interestingly enough, iOS users are getting first dibs on a new Meet tab, which will be widely available within the two weeks weeks and is "coming soon" to Android. The Meet tab highlights scheduled calls in a My Meetings list, and tapping on Meet URL from that view opens up a new preview screen.
Other features have not started to roll out. However, Twitter user Tahman posted a few screenshots of new features shared during Google's ongoing Cloud Next '20 OnAir event. Shown at the top of this article is a slide titled, "Introducing your new home for work."
In addition to integrating Meet into the experience, the slide highlights tabs at the bottom for "Chat" and "Rooms." As the labels imply, the Chat option opens up individual chat sessions, while the Rooms label brings up different groups users can hop into. And as Gmail does with emails, users can expect a "nudge" for "neglected chats."
The Rooms feature is reminiscent of Slack. It's a way to stay organized and in contact with co-workers and collaborators, though whether Android users will choose the Gmail integration over Slack remains to be seen. 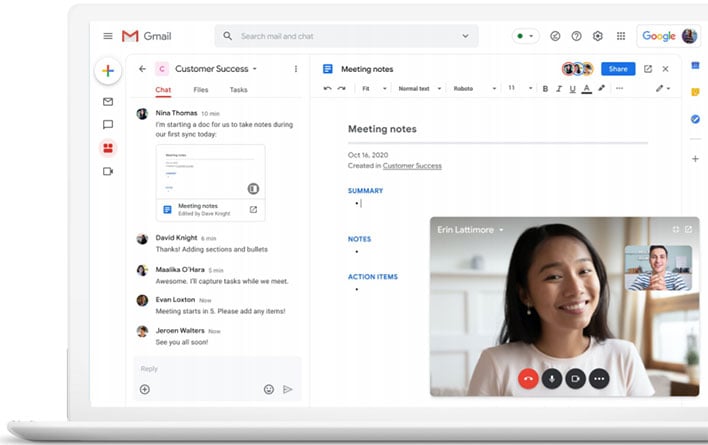 Collaboration is the name of the game here, and it underpins another neat feature headed to Gmail on Android phones and tablets.
"Side-by-side document editing alongside chat, plus picture-in-picture meetings so you can always see who you're working with," Google explains in one of the slides.
There are other Google Meet features headed to Gmail as well, such as custom backgrounds, Q&A sessions, meeting attendance, hand raising, shared communications and files, and so forth. It's all part of what Google considers to be "phase 1" on its Meet integration.
The timely update gets a reveal as more people find themselves working from home, due to COVID-19. Confirmed cases have been on the rise, and it seems that telecommuting will remain the norm for quite some time.