Earlier this fall, we reported that Google would be rolling out 2Gbps fiber internet to customers in some of its existing markets. The company launched trials in Nashville, Tennessee and Huntsville, Alabama in October and promised that all of its customers in those two cities would have access to the higher speeds by the end of 2020.

True to its word, Google announced its full-scale 2Gbps rollout to Nashville and Huntsville, which means that now all of those existing fiber customers can join in. Customers will be able to stay on their existing 1Gbps plans for $70 month, or step up to 2Gbps for just $100 a month. Those are absolutely drool-worthy speeds, and I am personally jealous as I pay $70 a month for "mere" 300Mbps cable internet. 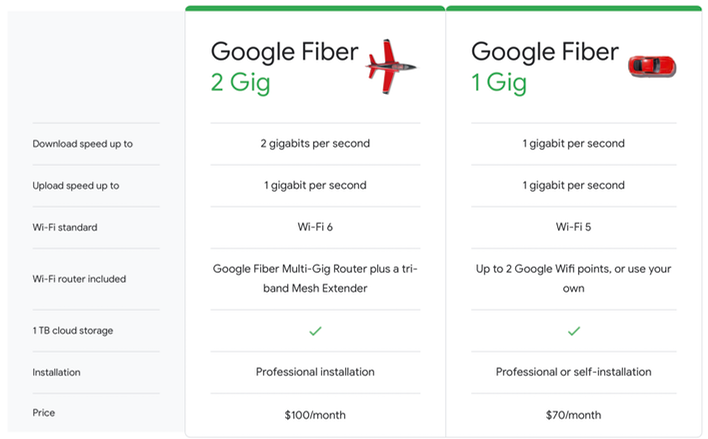 For customers that make the upgrade to the 2Gbps service, you'll get a Google Fiber Multi-Gig Router (Wi-Fi 6, 2.4GHz + 5GHz bands) and a tri-band Mesh Extender (5GHz band only). The Multi-Gig router has a single 10G ethernet port, and four GbE ports. The Mesh Extender offers an additional two GbE ports if you need them.

So, what exactly can you do with 2Gbps speeds with your Google Fiber service? According to the company, you can download a 2.5-hour 4K movie in just 1.2 minutes or a 10GB game in just 42 seconds. Needless to say, customers should get easily drunk with speed and won't have to worry much about waiting around when it comes to downloading updates for Windows 10 or the latest mega-patches for their favorite Xbox/PlayStation/PC game. We do have to mention, however, that while your download speeds can hit 2Gbps, your uploads will still be capped at 1Gbps.

Google Fiber is also available in 17 additional market across the United States, and "most" of them will be upgraded to 2Gbps speeds early in 2021.