Do you remember what you used to do before the internet? Whether it's reading a book, hiking, or watching a TV show, you may have to return to those activities. Snapchat and several other services are down for some users today as an apparent and massive Google Cloud outage wreaks havoc with a bunch of popular apps, games, and services.
Snapchat's support arm confirmed the outage in a Twitter post a little bit ago saying, "May Snapchatters are having trouble using the app. Hang tight, we're working on a fix. In the meantime, we recommend staying logged in."
Discord also posted a message on Twitter saying, "There appears to be an issue upstream that is being worked on as we speak. We're seeing Discord becoming available again, and the the team is working through ensuring a smooth recovery." Since posting that, however, Discord has gone on to say that all services are fully recovered and stable. 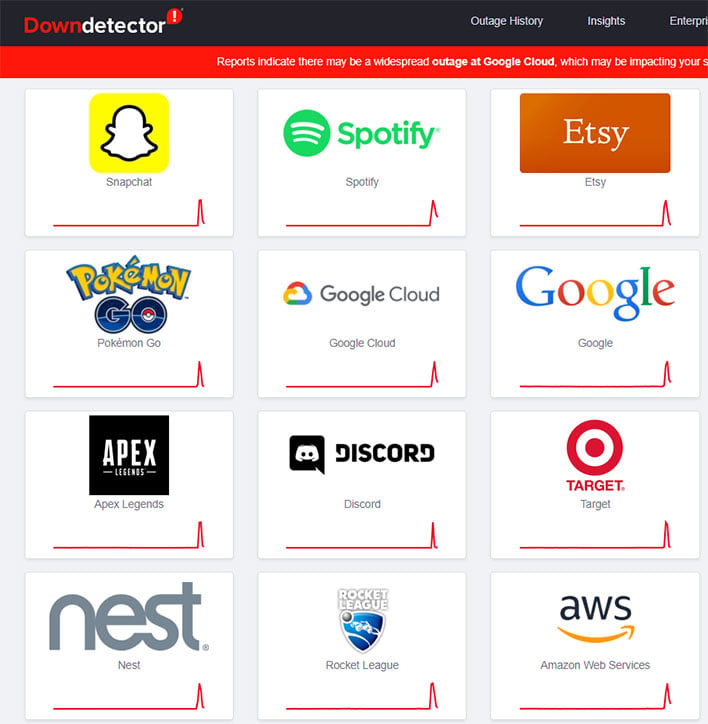 Some users still report problems (it's working fine for us at HotHardware, knock on wood). A visit to Downdetector shows a whole bunch of sites impacted by whatever is going on. Some of them include...
It's a rather long and varied list. Downdetector says, "Reports indicate there may be a widespread outage at Google Cloud, which may be impacting your service," but little other details are known at this time. Google's Cloud dashboard indicates there is still an issue with its Cloud networking service with no ETA for a full resolution yet.
Some services report being back online already. Rocket League, for example, issued a recent update saying, "The service disruption has been resolved, and both Rocket League and Rocket League Sideswipe are operational." But just as with Discord's update, there are users who say they are still experiencing issues.
If you're having problems logging into certain services all of a sudden, there's a good chance this is why. Hopefully Google will figure out which cord someone tripped over and get it plugged back in ASAP.