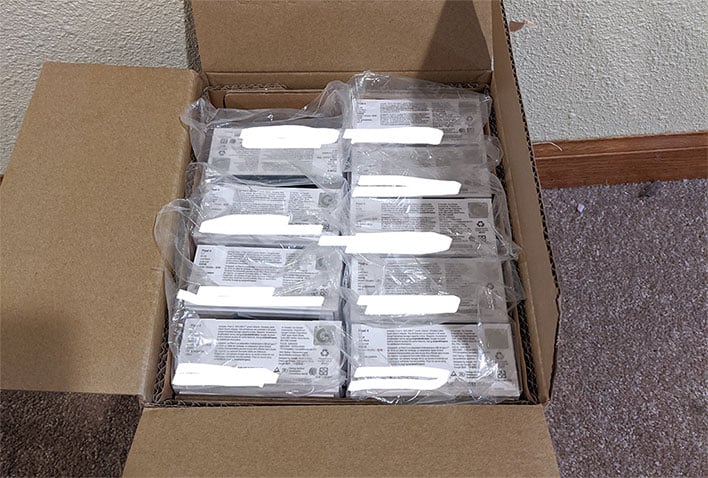 A recent round of discounts has brought the Pixel 4 down to the lowest price we've ever seen—starting at $499 for the regular Pixel 4 with 64GB of built-in memory, compared to its $799 launch price. It's a heck of a deal, but imagine receiving 10 of them for the price of one. It actually happened to someone, as the apparent result of an order fulfillment blunder on Google's end.
A box of 10 Pixel 4 handsets is worth $4,999 at the going rate, and $7,999 based on the non-discounted price. So, the lucky fellow who received the unexpected windfall ended up with $4,500 worth of additional merchandise that he was not expecting. Talk about luck, though Google is really the fortunate one, because the person who received all those extra phones ended up being an honest individual.
As he explained in a Reddit post, user "timias55" ordered an unlocked Just Black Pixel 4 (64GB) for $499 plus tax. Two days after placing his order, FedEx dropped a box with a whole bunch of Pixel 4 phones.
"I gotta be honest, for a moment it felt like winning the lottery, but it was only a moment as [an] angel on my shoulder, and my wife, both spoke up, and I knew there was only one choice," the user wrote.
The buyer ended up chatting with a customer service agent, who requested a photo of the packing slip and also of the box of phones. It turned out to be a bit of a hassle. He removed one of the phones from the box—the one he ordered and intended to keep—and took a photo of the rest. Though he explained this to the rep, they apparently got confused.
"They asked me to wait three separate times, and then sent me an email two days later letting me know that FedEx would be stopping by to pick them up. The tracking slip only had a quantity of eight. Talk about rubbing salt in the wound, but I contacted Google customer service again to ask them how to proceed. After more deliberation they told me to return eight and they would send a tracking slip for the ninth separately," the buyer stated.
The whole process should have been easier than Google made it out to be. Regardless, Google got its extra phones back and timias55 kept his conscious clear (and wife happy), even though he probably could have kept the phones without any legal repercussions.

Can You Keep Merchandise Received That You Did Not Order? FTC Sounds Off

This is the part where I say I'm not a lawyer. However, the Federal Trade Commission says "if you receive merchandise that you didn't order, you have a legal right to keep it as a free gift." And if a user does decide to return an item in these situations, it suggests having the seller cover the shipping costs.

"Although you have no legal obligation to notify the seller, you may write the seller and offer to return the merchandise, provided the seller pays for shipping and handling," the FTC says.
Someone in the Reddit thread posited the FTC's rules don't apply to a situation like this one because the buyer did actually order a product. However, he did not order the nine extra smartphones, so he's probably wrong. The Consumerist certainly seems to think so—in an article from 2017, the site fielded a question from a reader who said she ordered an iPad from Target during Black Friday, and ended up receiving two of them.
A spokesperson for Target told the site that the retailer recommends calling a customer service rep, and that the first option in these situations is to keep or the donate the extra product.
"If a guest chooses not to do that, we have an ‘exceptions process’ where they can return the product in the mail," the spokesperson said. "They should speak with a Target online guest service representative for instructions, and then return the item to us with all order information removed from the package."
As it applies to the Pixel 4 phones, had the customer kept the extra phones, it would have been technically possible for Google to effectively blacklist the handsets, based the IMEI codes of the ones that were not paid for. Whether that is a legal option, well, that's a question for a lawyer to answer. Google probably wouldn't have gone through the trouble of blacklisting those phones anyway—it wouldn't be worth the inevitable bad publicity—but who knows for sure.
Google could certainly afford a mistake like this, as some users pointed out. But kudos to timias55 anyway—even though Google wouldn't feel an impact from a $4,500 mistake, the same might not be true for the employee who screwed up the order fulfillment.
Top Photo Source: Imgur via Reddit (timias55)