A recent CPU-Z Validator entry adds credibility to the rumor that AMD is getting ready to refresh its X570 chipset. The listing highlights an unannounced Gigabyte X570S Aorus Pro AX motherboard, paired with an AMD Ryzen 7 5700G processor, and it marks the second time we have seen a reference to X570S. The last time also featured Gigabyte.
Earlier this month, it was discovered that Gigabyte had registered a few unreleased motherboards with the Eurasian Economic Commission (EEC). Three of them pointed to the upcoming chipset refresh, including the X570S Aorus Elite, X570S Gaming X, and simply the X570S (which may have been a placeholder for the X570S Aorus Pro AX spotted at CPU-Z's database).
This "X570S" designation could be something Gigabyte is doing on its own, but there is speculation it is more likely based on what AMD has up its sleeve, which is a passively cooled version of the X570 chipset—it's been suggested the "S" stands for "silent" in X570S. 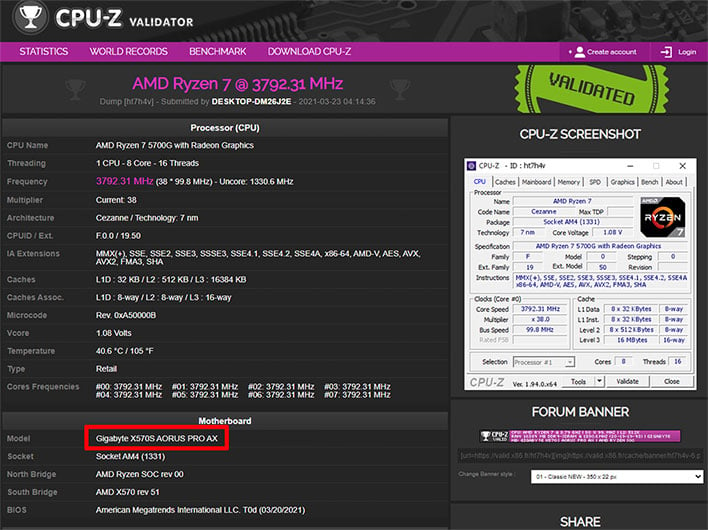 Bearing in mind that nothing is official, there's reason to believe a passively cooled chipset refresh is in the works. It's worth noting that AMD designed its X570 chipset on its own, rather than outsourcing the design and manufacturing to ASMedia, as it had done in the past. What it came up with is a chipset that has an 11W TDP, versus 4.8W for X470.
The higher wattage is largely due to baking in support for PCI Express 4.0. It also means there is a need for active cooling. So what does that mean for X570S? Time will tell.

Assuming there is a chipset refresh coming out, we highly doubt AMD will drop PCIe 4.0 support, as that would create confusion and probably annoyance in the marketplace. But perhaps AMD has found a way to optimize its chipset so that active cooling is not needed. Or maybe X570S motherboards will feature chunkier heatsinks, to get around the need for a fan. Heck, maybe the "S" doesn't actually stand for "silent," but something else.
Whatever the case might be, Gigabyte is clearing cooking up at least one X570S motherboard, and probably more than one, based on the previous leak.