In due time, Intel will release its Core i9-13900KS Special Edition CPU to retail, and with it will come a 6GHz max turbo frequency out of the box. It's officially the world's first 6GHz consumer desktop CPU. That's all well and good, but if you don't want to wait and/or splurge on the upcoming flagship, you can try your hand at overclocking. Gigabyte's been making it easy with an exclusive feature that enables a 6GHz clock on select Raptor Lake CPUs when paired with its Z790 motherboards, and now it's available on the company's Z690 lineup as well.
"By simply upgrading the latest BIOS with Instant 6GHz activated, the system can automatically tweak CPU voltage and Vcore Load Line Calibration of Intel Core i9-13900K and Core i7-13700K processors to detect the most two optimized cores running at 6GHz frequency. This further delivers a 3% performance boost on one single core," Gigabyte explains. 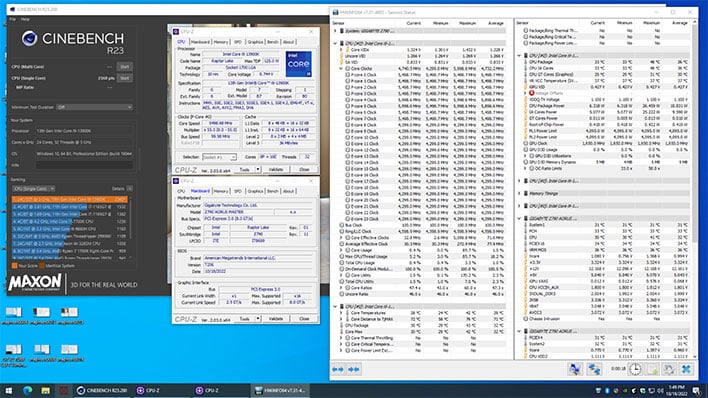 One of the reasons this is possible is because Intel's Z690 and Z790 platforms both utilize the same LGA 1700 socket. If you built an Alder Lake PC, you have an upgrade path to Raptor Lake that doesn't necessarily involve ripping out your motherboard and installing a new one—you just may need to update the BIOS, depending on your motherboard model.

It's not clear if Gigabyte has extended this feature to its entire crop of Z690 motherboards, though of the several ones we looked into (Z690 Aorus Xtreme, Z690 Aorus Pro, Z690 Aorus Tachyon, Z690 Aorus Elite DDR4, and Z690 Gaming X DDR4), the release notes for the latest BIOS update references support for an "Instant 6GHz profile" option.
In any event, you're looking at a small performance gain in certain situations, at the cost of a higher power draw and potentially higher temps. Also note that this amounts to overclocking (albeit Gigabyte makes it quick and easy with its instant 6GHz setting) as opposed to this being a feature of the Core i9-13900K/KF and Core i7-13700K/KF, so your warranty may be considered voided as a result.