Genshin Impact Free To Play MMO Gets Dragonspine Map In Version 1.2 Update, What To Expect

The massively-multiplayer online RPG Genshin Impact has taken the world by storm when it launched for PC, iOS, Android, and PlayStation 4 at the end of September. Since then, big content updates have added a whole raft of new features. Developer miHoYo claims the game had over 10 million accounts registered before it even launched, and the Chinese company hasn't rested on its laurels or the game's early success. Today the company announced version 1.2, which adds a new environment to explore, new creatures to battle, and more treasures to find.

miHoYo just wrapped up its livestream for Genshin Impact version 1.2, and there's a ton of content to cover. The first new area in the game is Dragonspine, a frozen mountain range south of the city of Mondstadt, that is one of the most inhospitable areas in the game's fantasy world of Teyvat. miHoYo says that travelers will want to get leveled up and gear up before venturing into Dragonspine. Players will meet the Seelie, who are incandescent balls of light, and discover an ancient civilization who's none-too-pleased to have been woken from its slumber.

Genshin Impact players will experience a new seasonal event in Mondstadt, as well. Experienced players level 20 and higher to assist Albedo, Chief Alchemist and Captain of the Investigation Team of the Knights of Favonius in Mondstadt (whew, that's a mouthful!) in finding a new, powerful weapon. Festering Desire is a mysterious and powerful sword buried somewhere in the mountains of Dragonspire, and Albedo will join players' parties to help find it. By completing additional goals, players can level the sword up to its highest refinement level. 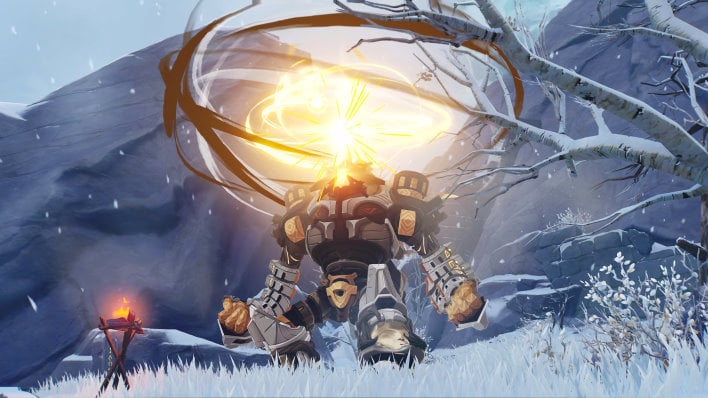 New status effects will affect players as they travel Dragonspine. If the Sheer Cold is allowed to build up by venturing out without a heat source, players will get increasingly cold, and eventually die in the elements. So much for a fantasy escape from real life, right? Therefore, the game encourages players keep seeking for heat sources like torches, campfires, and even the Seelie creatures they're aiding.

There's quite a bit more packed into the 49-minute video stream, but these are the biggest highlights. Genshin Impact version 1.2 is scheduled to hit the game on December 23. While the game does have its fair share of microtransactions to gain shortcuts in experience and Crystals, the game's currency, miHoYo says that none of that is required to enjoy the title. The game has made a pretty hefty impact on app stores, too. By Sensor Tower's estimates, the game has already seen more than $390 million in revenue in the first two months.