Armed with unlimited funds, we would all opt for the fastest hardware available, cost be damned. Money does not actually grow on trees (not directly), however, hence the need for cheaper options. NVIDIA's upcoming GeForce RTX 3050 mobile GPU will help fill that need, and if recently leaked specifications are any indication, there will be some interesting budget gaming laptops coming out relatively soon.
So far, NVIDIA has released three core GeForce RTX 30 series mobile GPUs for laptops. They include the GeForce RTX 3080 (6,144 CUDA cores), GeForce RTX 3070 (5,120 CUDA cores), and GeForce RTX 3060 (3,840 CUDA cores). Factoring in the different power profiles and configurations available to NVIDIA's hardware partners, there is actually a dizzying array of RTX 30 mobile parts.
A GeForce RTX 3050 mobile GPU could be next in line. While nothing of the such as been announced, it has seemingly made an appearance in a GPU-Z photo. Have a look... 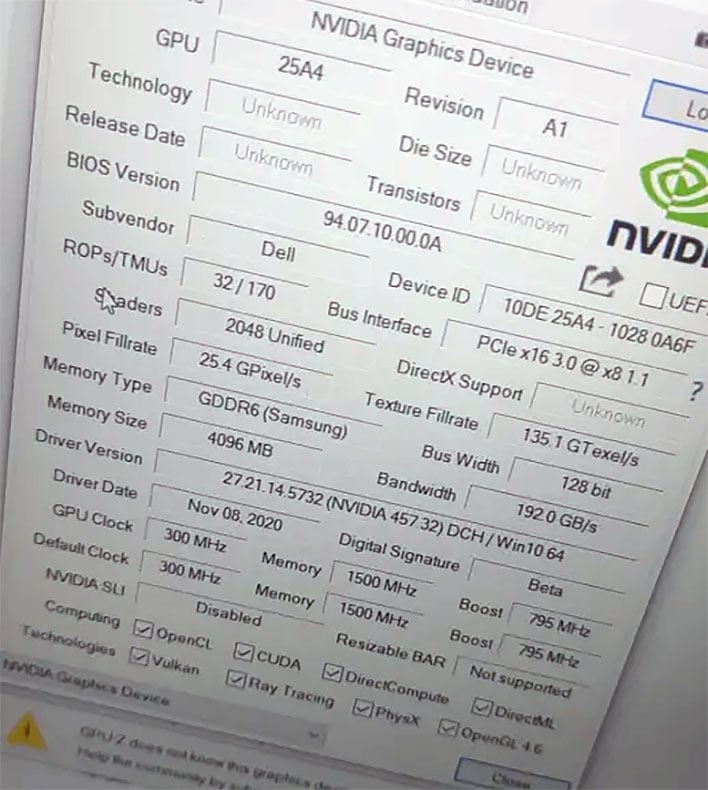 Why the user couldn't just take a screenshot or at least a better quality photo is beyond us (it's time for leakers to break the unwritten rule that leaked photos have to be low quality). But anyway, the interesting part here is the device ID: 10DE 25A4. If we look this up, it is revealed to be a GA107 GPU, according to The PCI ID Repository. Based on past leaks, this is what the GeForce RTX 3050 is believed to be based on (GA107M, to be a little more specific).
If that's the case, the the GPU-Z screenie offers up some revealing details. It shows the mystery part as having 2,048 CUDA cores and 4GB of GDDR6 memory (12Gbps), along with a 128-bit memory bus, allowing for 192GBos memory bandwidth.
The mystery GPU also appears to be part of a Dell laptop. The GPU clock fields show it boosting to 795MHz, which is either a lower clock for testing (an engineering sample) or an aggressive limitation for a Max-Q configuration. Given that the GeForce RTX 3060 in mobile form runs at 1,283MHz to 1,703MHz, it is reasonable to expect the GeForce RTX 3050 in mobile form will be clocked north of 1,000MHz. Or maybe 795MHz is the lower end, and for whatever reason, this Dell system is capping the GPU at what could end up being the official part's base frequency.
Whatever the case might be, this is shaping up to be an interesting part for budget gaming laptops. Bearing in mind that 4K gaming is not the goal, the GeForce RTX 3050 as configured should deliver a decent performance punch above what any current integrated graphics solution can offer, with ray tracing to boot. We'll have to wait and see how clock speeds actually shake out, though.