I'm always disappointed when I walk into a GameStop store and see what little space is devoted to PC gaming, especially having grown up in the era of Software Etc., one of my favorite places to visit when it was still around. It seems a change is coming, however. GameStop announced it is expanding into PC hardware, and will sell a variety of related products, even GeForce RTX 30 series graphics cards.
In time, anyway. Like every vendor on the planet, GameStop's listings for the latest generation graphics cards are out of stock. Nevertheless, GameStop's expansion into PC hardware gives customers another portal to find deals, outside of the usual suspects (Amazon, B&H Photo, Best Buy, Newegg, Walmart, and so forth).
GameStop CEO George Sherman announced the expansion during a recent earnings call.
"We are continuing the work to expand our addressable market by growing GameStop's product catalog. This includes growing our product offerings across PC gaming, computers, monitors, game tables, mobile gaming, and gaming TVs to name only a few," Sherman said.
Sherman said those categories represent "natural extensions" to GameStop's current offerings. Furthermore, he anticipates the addition of PC gaming hardware to grow the company's addressable market size more than five-fold "and over time will reduce our reliance on the cyclicality of the console-based gaming market."
It's an interesting point. Microsoft and Sony each launched a new generation of game consoles last November, and it will likely be 5-7 years before they do so again (we can expect incremental upgrades in between major new launches). PC gaming, however, is a fluid market in terms of constant product launches. For example, Intel just launched its Rocket Lake-S processors, and later this year it will debut Alder Lake-S. 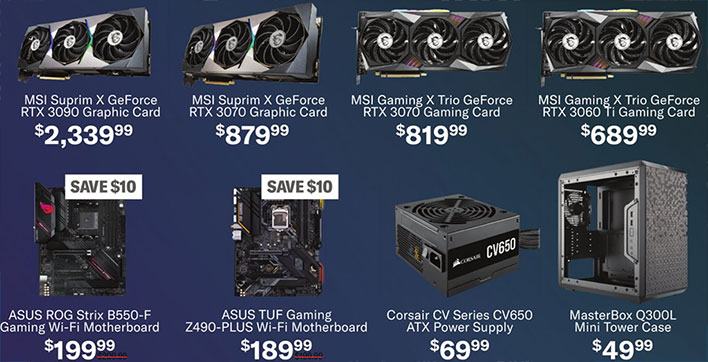 One thing that's not clear is how much PC hardware will be sold in actual brick-and-mortar stores. In the meantime, GameStop's website has fleshed out its PC gaming portal with links to desktops, laptops, accessories, and virtual reality. Here are a few products that are currently listed, including some that are already on sale...
GameStop also carries various gaming chairs, monitors, keyboards, speakers, and other PC hardware. Hopefully some of this stuff finds it ways into GameStop's physical stores, especially graphics cards. That said, Sherman noted that GameStop's global e-commerce sales ballooned 175 percent, accounting for more than a third of the chain's total sales in the fourth quarter (up from 12 percent in the same quarter a year ago).
It will also be interesting to see how this expansion effort affects GameStop's stock price over time, especially after Redditors spiked GameStop shares (it's currently trading at around $120 per share, versus around $20 before WallStreetBets worked its magic).