Is Your Galaxy Phone's Performance Being Intentionally Gimped? Samsung Is Investigating

A service found on some of Samsung's Galaxy smartphones might be holding back performance in games and other applications. It's called Game Optimizing Service (GOS) and it appears to be throttling Galaxy phones in more than 10,000 apps. Curiously, it seems to leave benchmarking applications like 3DMark alone.
The knee-jerk reaction to that sort of thing is that Samsung could be gaming the benchmark scene so that its phones (like the Galaxy S22 Ultra) perform better in reviews than the competition. This tactic is not unprecedented, and is obviously frowned upon. To be clear, we're not suggesting Samsung is doing that, but everything is on the table at the moment.
So what's going on? Most of the claims trace to Samsung's Korean community forums, and were brought to wider light by @GaryeonHan with this Twitter post... 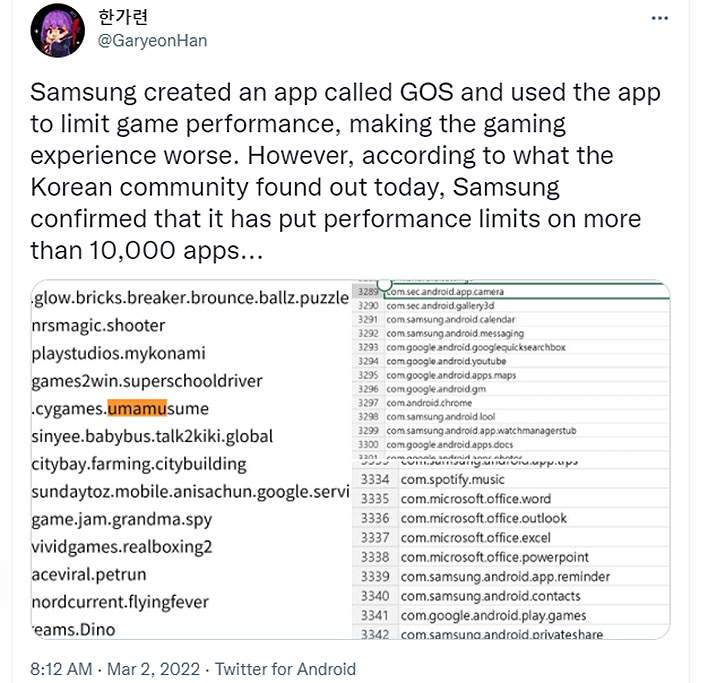 "Samsung created an app called GOS and used the app to limit game performance, making the gaming experience worse. However, according to what the Korean community found out today, Samsung confirmed that it has put performance limits on more than 10,000 apps...," the user states.

The huge list of apps includes not only games, but also Netflix, TikTok, and many others. Several of Samsung's own apps are in the list too, such as Samsung Pass and Samsung Cloud. But here's the kicker—there's a YouTube video that shows someone changing the name of 3DMark, which had a big impact on the performance and resulting score.
Before changing the name, the Galaxy S22 Ultra he used score 2,618 in 3DMark's Wilde Life Extreme test. After changing the package name, the score plummeted to 1,141, a greater than 56 percent drop. The average frame rate decreased as well, the only difference being whether GOS was triggered.
Hat tip to AndroidAuthority for spotting the throttling claims. Apparently Samsung is investigating the issue internally, and approaching it with the same vigor as the Note 7 debacle from several years ago. Hopefully that means Samsung will issue a public statement soon and, if necessary, an update to its Galaxy phones.