Have you ever played a FromSoftware game? The legendary developer's list of beloved titles includes such storied names as King's Field, Armored Core, and of course, the progenitor of the "Soulsborne" genre, Demon's Souls. That's to say nothing of the company's latest release, Elden Ring, which is well on its way to being one of the all-time top-selling games.


Well, if you have played a FromSoftware game in the last decade, you might have noticed that it wasn't very smooth. It's not something the average gamer is likely to pick up on, but if you're someone who is sensitive enough to smoothness that you shop for monitors on the merits of their response times, you will be able to tell that FromSoftware's games exhibit a strange sort of stuttering behavior in certain circumstances.

What's actually happening here is a phenomenon we call micro-stutter. It's also often called a "frame pacing" problem. Essentially, the game's frame delivery to the machine's output subsystems gets out of sync with screen refreshes, resulting in a sort of "stutter-step" movement as every other frame takes twice as long. It's most visible when moving the camera, and it's not the result of insufficient GPU power; it's not a "real" stutter.


To be clear, while this is technically a problem on every platform, it's much more noticeable on the company's console releases that employ a 30 FPS cap. Sticking a 33ms frame in between 16.7ms frames doesn't look great, but it's not as bad as when the game is capped at 30 FPS. That's because a drop to half-framerate at 30 FPS means that you have two frames almost 67ms apart—a long enough gap to visibly interrupt fluidity.
It is at this point where we will remark that famed PS4 hacker Illusion has created custom patches for a great many games. Some of them adjust the resolution up or down, others remove framerate caps, and still others modfiy the games to resolve performance problems. As you've no doubt guessed, Illusion has also created patches for all of the PlayStation 4 games from FromSoftware that seek to resolve the aforementioned stuttering.

Well, old mate Rich Leadbetter over at Digital Foundry put the patches to the test and found that, yes, indeed, Illusion's patches do fix up the frame-pacing foibles in FromSoftware's titles, allowing them to deliver a perfectly smooth 30 FPS in the affected games. He also found a curious consequence of the way the patches work, though: grotesque input lag.
Testing using Bloodborne and Elden Ring, recording his gameplay and his hands with high-speed cameras, he found that Bloodborne suffered an extra 78 ms of input lag on average, while the open-world Elden Ring suffered an extra 50 ms—with the caveat that its unmodified presentation is already laggier than Bloodborne's. Ultimately, both patches make their respective games much more difficult to play as a result of the extra input latency, but some people may actually prefer the lag over the inconsistent frame delivery. 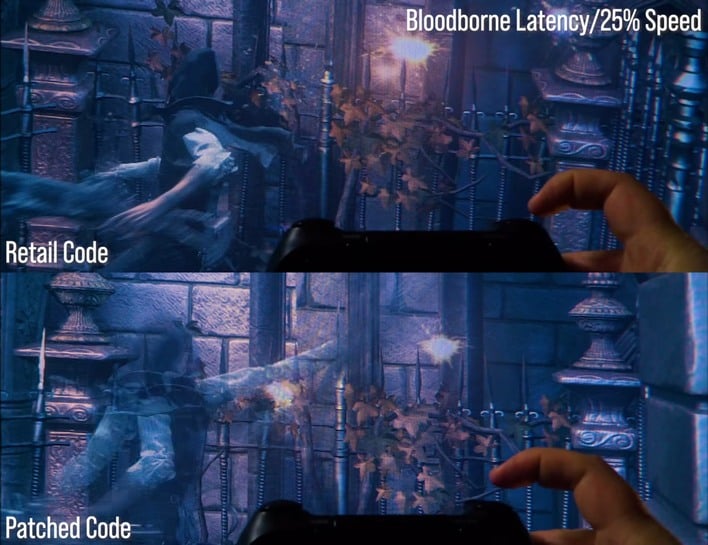 If you're keen to try out these patches yourself, hold your horses. First, you'll need a modified PlayStation 4 unit. You can't apply home-brew patches on a standard PS4, after all. And then note that even if you have the requisite modified PS4, you still won't be able to play the release version of Elden Ring, as it requires a newer system firmware than is available for modded PS4s. (Leadbetter was testing using the Network Test code.)

While the other games are unlikely to ever be patched, Elden Ring is expected to get a significant engine update eventually, adding ray-traced lighting and possibly other effects. Such an update may come along with the mentioned-but-not-announced DLC that will surely come along sooner than later. If so, perhaps FromSoftware can devote some attention to fixing up its frame pacing without sacrificing responsiveness.