What do the Broadway musical song The Sun Will Come Out Tomorrow and battle royale classic game Fortnite have to do with each other? Apparently, representatives at AMD are floating out hints in multiple entertainment genres that something BIG is coming soon. Tonight, Frank Azor, Chief Architect Of Gaming Solutions & Marketing at AMD, tweeted out a little snippet from the popular theater musical Little Orphan Annie.

Typically, executives in big tech companies do not just tweet musical lyrics for just any random reason, so we can assume that holds true now as well. Lately, hype has been building up for AMD's Radeon Big Navi lineup of GPUs that are expected to arrive soon, so something is bound to happen. Tonight, Frank Azor sent out a tweet that ignited a bit of a firestorm in the AMD community: 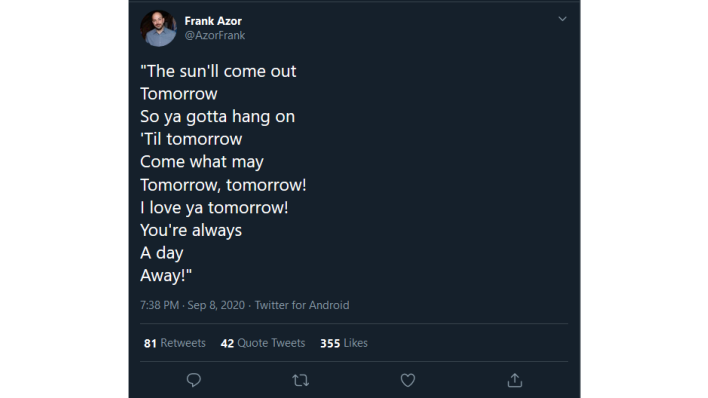 The only guess we have currently is that something about Big Navi is coming tomorrow. This would conveniently coincide with the Fortnite easter egg that was just discovered noting the model branding of Radeon 6000 and "something BIG" as well. Regardless, time will soon tell and we shall see a bit more, apparently.

Back in May, we had Frank Azor on the Two And A Half Geeks podcast (yes, hit thumbs-up and subscribe), where he covered quite a bit about life behind the scenes of AMD. We did not hear much about Big Navi back then, but perhaps it is time to change that. Ultimately, we have no clue what could be coming tomorrow, so it may be good to go back and listen what Frank Azor had to say about AMD operations a few months back.

No matter what, it is an exciting time for AMD and in the technology world overall. Hopefully, we will get to find out what is coming when “the sun'll come out, tomorrow." So ya gotta hang on, 'til tomorrow, so to speak. Until then, stay tuned to HotHardware for the latest on AMD Big Navi and something big coming soon.