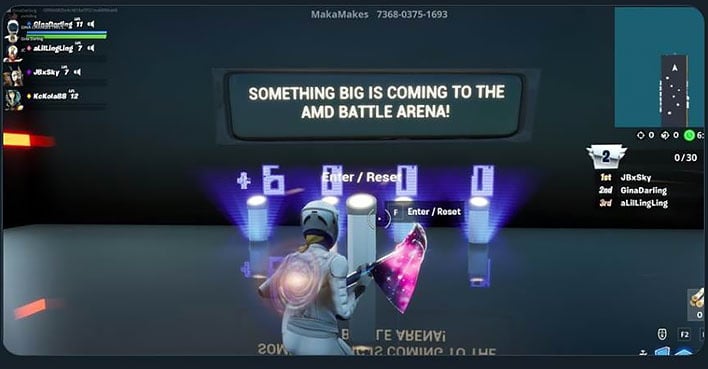 Only a few days ago, AMD worked with Fortnite Creative Island modder MAKAMAKES to create the custom AMD Battle Arena in Fortnite creative. Players have the option of playing three different game modes, and among the maps, there apparently was a baked-in Easter egg referencing Big Navi model numbering, or at least so it seems.
Just this evening, a personality who appears to be an AMD-sponsored Facebook streamer, GinaDarling, was live playing and streaming Fortnite on this new map, when she discovered the AMD-planted Easter egg you can see below. It certainly seems like it is referencing the upcoming Big Navi lineup from AMD, as she had to enter code 6000 at one point in her trials and tribulations to get to the egg. Perhaps we can expect an announcement from AMD soon now that this has been triggered? The model numbering certainly makes sense. Logically, we have Radeon RX 5000, 5500 and 5700 series products, so where do we go from here? You're quick, indeed: 6000.

To figure out how this Easter egg was found, you also have to get into the AMD Battle Arena. The AMD Battle Arena map is a Fortnite map where AMD fans get to duke it out in an AMD-themed stadium. Full of seats, cool lights, and a phone booth surrounding the playing floor, the arena looked pretty slick under the night sky texture. AMD posted a video about the arena which you can see below, but that phone booth is key. Take a gander here and we'll explain more:


As the video shows, there are a few options for game play:

Free for All
Box Fights
Capture the Flag

You must get into either a Free-For-All or Capture The Flag Map to find the Easter egg.
Once you are in either of those types of matches, do the following steps to see the Easter egg for yourself:
And that is it!
With Big Navi not so far away, it does not come as a surprise that AMD is trying to garner some attention. In conjunction with this Fortnite map being released, a contest is being run as well.  If a user catches a cool in-game action clip, they can share that clip on social media with the tag #AMDSweepstakesEntry for a chance to win a Maingear PC powered by AMD.  This winnable PC is a little less beefy than the Maingear machine we reviewed recently, but it is still awesome nonetheless.

In any case, if you want to get into these games and find the Easter egg for yourself, you can do so by going into creative mode and entering the code 8651-9841-1639 to get to the map. If you want to see Gina's reaction to finding this Easter egg, you can view her stream here.  No matter what you do, stick around HotHardware for any upcoming news on Big Navi.