Fractal Design has discovered a manufacturing issue affecting half a dozen of its all-in-one liquid CPU coolers that could cause temperatures to rise above expected levels. In response, the company has temporarily halted sales of the affected AIO coolers pending a redesign and issued a voluntary recall out of an abundance of caution.
There are two issues at play. One is the soldering materials used in the aluminum radiator of the affected models, and the other is the introduction of impurities during the manufacturing process. Either or both of these can cause a reaction with the chemical composition of the coolant.
"Over time this may lead to sediment build-up in the circulating liquid getting caught in the fins of the CPU block, causing an increase in temperatures as a result of the blockage," Fractal Design explains. "Ultimately, if the blockage builds up further, it could affect the function of the pump and impede the water flow to a point where computer failsafe mechanisms are triggered, possibly throttling CPU performance, or causing a system shutdown."

The affected units include...
Only these Lumen models are potentially defective; Fractal Design says the same flaws do not affect any of its Celsius or Celsius+ AIO liquid coolers. 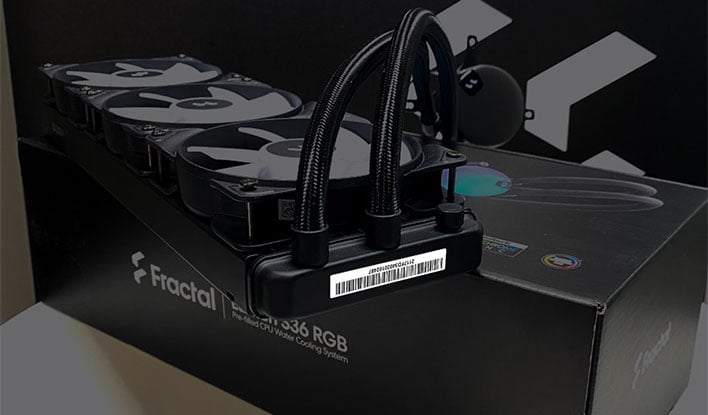 You can find the serial number of your Lumen AIO cooler on one of the short sides, as shown above.

Fractal Design deserves kudos for how it's handling the recall. It's offering to replace potentially affected models free of charge even if the issues don't present themselves. Furthermore, the company says users who are not experiencing issues can continue using their Lumen cooler if they wish, and will still be eligible for a replacement should an issue arise down the line.
"Replacement units will be kept available for serial numbers issued prior to the update," Fractal Design states in a related FAQ.
Fractal Design also says it is working on a new version with an updated radiator and a different liquid formula, and has implemented revised assembly processes and guidelines. Those who take advantage of the recall will receive a revised replacement. Availability is expected in about six weeks.
You can fill out Fractal Design's webform to request an updated unit.