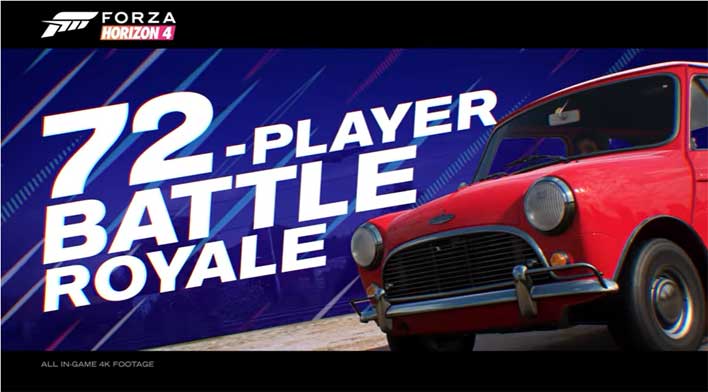 Game devs seemingly can't launch a shooter without a battle royale mode today to appease gamers. Battle royale fever is extending beyond the shooter realm with an announcement that Forza Horizon 4 is getting a new game mode called The Eliminator. Xbox One and PC gamers will get The Eliminator mode at no cost as part of a free update.

The mode will put 72 players around the open-world Britain backdrop of the game. The goal is for players to fly around and secure new pickups and faster cars. When the race starts, everyone is driving a 1965 Mini Cooper. Players can earn better cars by wining head-to-head races against other players or by locating Car Drops around the world.

If drivers win the head-to-head challenge races, they get to choose an upgrade for their ride or can steal their opponent's car. As the players fly around the map, racing others and searching out Car Drops, the area boundaries close in. When the boundaries reach the final position, all players have to race to the finish line. The first-place finisher will be crowned the Eliminator.

The Eliminator update goes live today, December 12th, at 6 pm in the UK and 10 am PT. The new mode comes alongside a special mini-campaign and new unlockable rewards. The rewards include the 2008 Renault Megane R26.R, 2016 Porsche 911 GT3 RS Pre-Order edition, and a 1970 Mercury Cougar Eliminator. A range of Eliminator-branded clothing for the onscreen characters will be available. Check out the video trailer for the new mode to get an idea of what the mode is like. Forza Horizon 4 is a cool and popular game, the list of hundreds of cars the game offers was unveiled in 2018.