Fortnite fans who have been waiting in anticipation for Season 2, Chapter 2, to launch should be excited as today is the day. A new trailer for Chapter 2 has been published, giving us a look at what the season will bring, including the man with the gold hands. The trailer for the season essentially shows characters who are turning into agents to answer the call of the man with the gold hands.

One interesting thing of note is at about 47 seconds in the trailer when the cat-like creature covered in leaves moves away from the tree; you get a quick glimpse of Deadpool carved into the tree along with an interesting circle with a number "7" inside it and three stick figures along with four question marks gathered around the circle. That circle is presumably hinting at something in the season. Other than the trailer, some tidbits are given up about the new season on the Battle Pass page, teasing more choices, new bonuses, and more. The Battle Pass is 950 V-bucks with the potential to earn up to 1500 bonus V-bucks while playing along with more items from the shop.

Players are invited to choose their agent from the top ranks of the agency, with each Battle Pass Agent bringing their own unique signature style to the mission. Players will be able to "surf the skies as TNTina," gain the golden touch as Midas and win security clearance to a special surprise agent in the Battle Pass. As with past Battle Pass offerings, there will be weekly challenges for each Battle Pass character, with players able to choose between ghost or shadow missions to unlock their chosen character's bonus style. 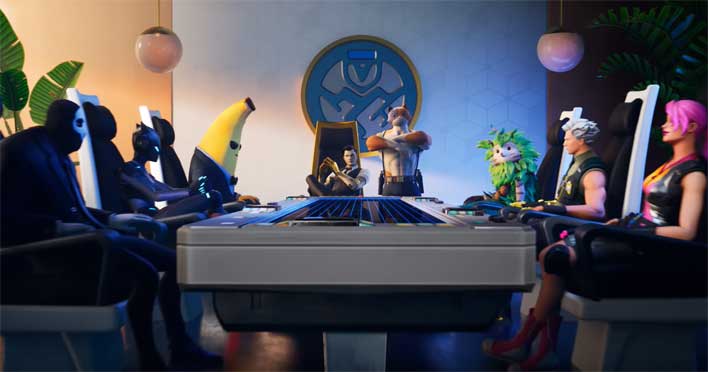 One caveat is that the choice the player makes is permanent, with the final mission locking the bonus style to ghost or shadow. The content of the season includes new weapon wraps, new drop-in styles, including a ridable rocket and a bird-like creature. Players will get to pick their ax, and there are new back blings to choose from. Players will be able to "level up your look" with the most dedicated agents being promised handsome rewards, which we assume means a full gold skin. Check out the trailer above for more details. Now we know what the gold hand that was on some Fortnite advertisements seen around the world earlier this week meant.