Fortnite's New Imposters LTM Has Among Us Developers Crying Foul

A couple of the developers behind the popular Among Us game are not real happy with Epic Games right now, after releasing its Fortnite Imposters Limited Time Mode (LTM) this week. As the saying goes, imitation is the sincerest form of flattery, and there is a lot of imitation in the video game space. But even the map in Fortnite's new mode is similar.
It's not identical in every aspect. Fortnite Impostors supports up to ten players, including eight

Agents tasked with maintaining The Bridge, and two Imposters who try to overtake it. In contrast, Among Us can be played with four to 15 players, and up to three imposters, who are randomly chosen at the beginning of each round.

"Work together to root out anyone masquerading as a fellow Agent, but trust nobody completely — anyone could be an Impostor. If you find a fellow Agent’s eliminated fragment, report it! Everyone will be teleported to The Bridge where you can inform Agents who you suspect might have betrayed the IO and vote them out," Epic Games explains.
It's common for different studios to latch onto similar gameplay mechanics and styles, as we have seen play out with battle royale modes. But apparently Epic Games did not reach out to Innersloth, the studio behind Among Us, before implementing its own take on the genre popularized by Among Us. 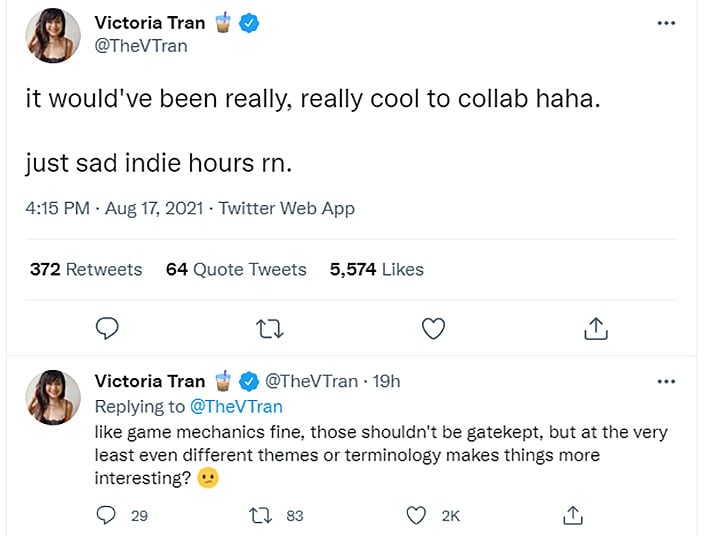 "It would have been really, really cool to collab haha. Just said indie hours rn," Innersloth Community director Victoria Tran stated on Twitter.
In a follow-up tweet, Tran said the issue is the game mechanics, as "those shouldn't be gatekept." However, Tran said "but at the very least, even different themes or terminology makes things more interesting?," followed by a confused face emoji.
Tran was not the only one from the Among Us team who tweet consternation at the similarities between the game and Fortnite's Imposters LTM. So did Gary Porter, one of the developers, who posted comparisons of the maps in Among Us and Fortnite Imposters. 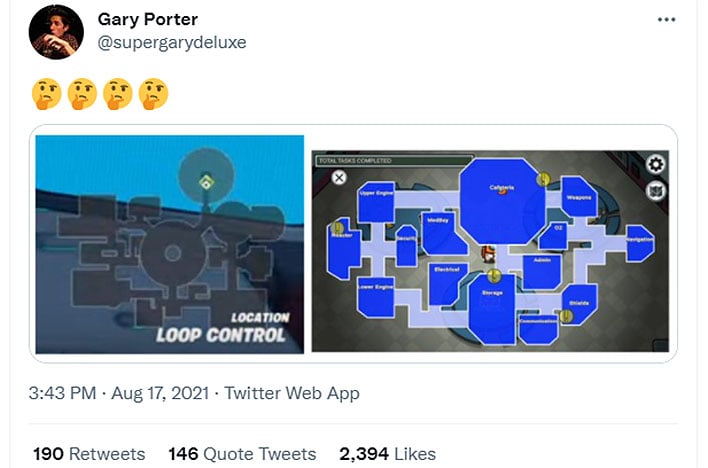 His initial tweet showed the maps side-by-side with a series of thinking face emojis, then he elaborated in some follow-up posts.
"I haven't been tweeting much recently because I've been working so hard on upcoming content for Among Us. So it feels weird to be compelled to tweet again because of stuff like this. It's okay tho they flipped electrical and medbay and connected security to the cafeteria," Porter sarcastically noted.

Porter noted that he was not even around when the team developed the Skeld map in Among Us, which served as inspiration for Fortnite Imposters, but he's "still kind of offended."
What's your take on the situation—should Epic Games have reached out to the Among Us team and collaborated or at least changed things up more than they did, or this much ado about not very much? Sound off in the comments section below!

Innersloth co-founder Marcus Bromander also weighed in on the controversy.
"We didn't patent the Among Us mechanics. I don't think that leads to a healthy game industry. Is it really that hard to put 10 percent more effort into putting your own spin on it though?," Bromander tweeted.

Tags:  Gaming, Epic Games, fortnite, among us
Show comments blog comments powered by Disqus
Follow Us:
FSR Or DLSS For The Win?