We are not going to lie -- the upcoming Among Us update looks sus. Among Us fans will be excited to hear that a new map is on its way, and developer InnerSloth recently teased an image of this map on Twitter. The picture from Twitter spotlights a large, open cockpit. Other Among Us maps feature derelict locations that are cluttered with wreckage. However, this new map seems to be surprisingly clean.

The developers stated in a tweet from this past September that the upcoming map is “a Henry Stickmin themed location.” The Henry Stickmin games are of the choose-your-own-path variety. InnerSloth has developed six of these games over the last few years and released a Henry Stickmin Collection this past August with all of the games in the series. 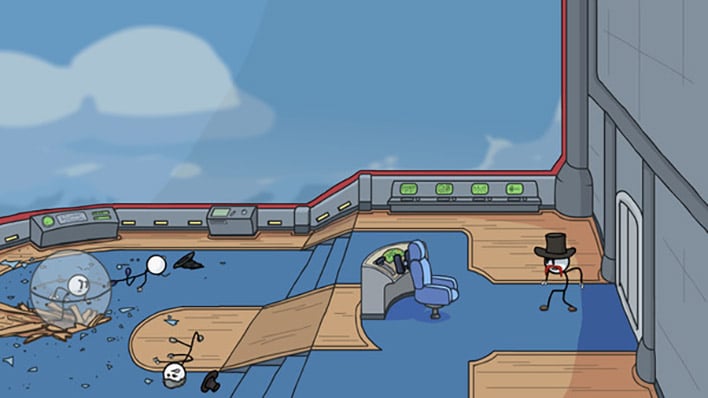 Image from the Henry Stickmin Collection

This image interestingly features a vent in the middle of the room. Most Among Us vents tend to be in the corners or along the sides of rooms. It will be interesting to see how this vent’s position impacts gameplay. We could see the location of this vent making it more difficult or easier for “imposters” to rack up kills.

It is unclear what kinds of tasks will be available in this new room or on the overall map. “Crewmates” have needed to stabilize steering, upload data, fix wiring, and other kinds of tasks in “Navigation.” The new map may feature entirely new tasks or may maintain some of the ones players have become accustomed to.

InnerSloth promises that it will reveal more information about the upcoming update at the Game Awards on December 10th. Among Us has been nominated for “Best Mobile Game” and “Most Multiplayer.” According to InnerSloth, “It's getting reaaaaal suspicious over there.” It looks like we have a few weeks until we learn more, but good things to come to those who wait.

Among Us is an online and local party game in which the imposter attempts to kill his or her crewmates, and the crewmates complete tasks and try to vote out the imposter. The game was released in 2018, but experienced a spike in popularity this past summer. Many have argued that the recent health crisis has led people to look for alternate methods of socialization. The game has also been played by many popular YouTubers and Twitch streamers such as PewDiePie. InnerSloth had planned to release a sequel, but canceled it in light of the growing popularity of the original game. They have stated that the content from the sequel will instead be added to the current game.

Tags:  among us, innersloth, game awards
Show comments blog comments powered by Disqus
Follow Us:
FSR Or DLSS For The Win?