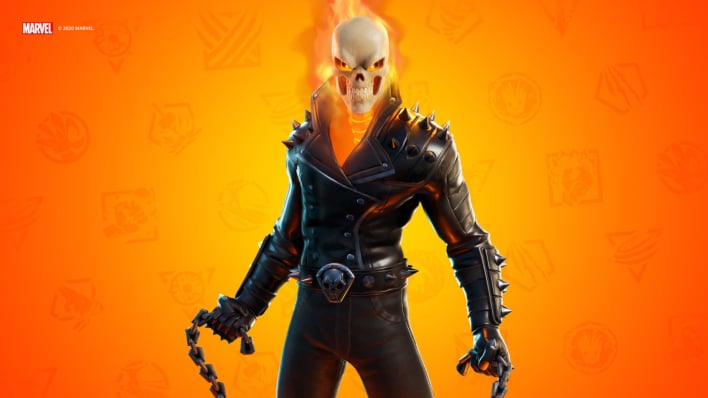 Are you ready to hunt down some sinners in Fortnite? If so, the recently decrypted and subsequently announced Ghost Rider set for Epic Games' Battle Royale may be just what you need. Fortnite leaker ShiinaBR shared a preview and some information about the skins on Twitter. The on-fire cosmetics include a glider skin, a pickaxe skin, weapon and vehicle skins, and some other things you can see below.

Fortnite leaker ShiinaBR has been seemingly working on the Ghost Rider set of skins for a little while. On November 3rd, they discovered new bundles in the Fortnite update, which included the following:
ShiinaBR, having the data from these bundles, could break all of them open and see what is inside. It appears that the Ghost Rider set was the first to crack overnight. The whole set can be seen in their tweet below.

The Ghost Rider set was decrypted while I was sleeping, but here's still a showcase with ALL his cosmetics! :D pic.twitter.com/Kl9QiHGP3P

After that tweet was posted, some questions were raised about the bike specifically. People were concerned about the way a character would use the bike. In the animation from the video, players would "surf" on the bike, but that would not make sense canonically. ShiinaBR addressed this with another tweet stating that sitting on the bike is still possible.

This could still happen! It's either a surfing animation or the player actually sits on the bike!

I just wanted to explain that the player does not use the grips at the bottom of the screen as some users thought.

None of the leaks ended up mattering too much, though, as Fortnite went ahead and announced the competition for the skins.  The event, called "Marvel Knockout Super Series - Ghost Rider Cup," started today.  If you wanted to get in, you would have needed to be level 30 and had 2-factor authentication enabled. Fortnite also announced two more events on the 11th and 18th of this month, so hopefully we will see more cool skins soon.  In any case. the hope is that these skins will hit the Fortnite store soon. If you are an avid player of Fortnite and want to stand out, these badass skins are the way to go. A sweet chopper, leather outfit, and flames on everything lets you live out your Battle Royale life as the Marvel antihero played by Nicholas Cage.