Today marks the launch of Cobra Kai season 4 on Netflix, and right on cue Epic Games has updated Fortnite with a special crossover event. You can't sweep the leg (a dirty move anyway), but there is a new Mr. Miyagi crane kick emote available, plus you can dress up in a bunch of different Cobra Kai, Eagle Fang, and Miyagi-Do outfits.
"Among the ten outfits are Karateka Jones, learning karate to defend reality, as well as Heron Stance Hero, known for her honor. The Cobra Kai Set outfits can be purchased individually or as part of the Karate KO and Dojo Showdown Bundles," Epic Games says. 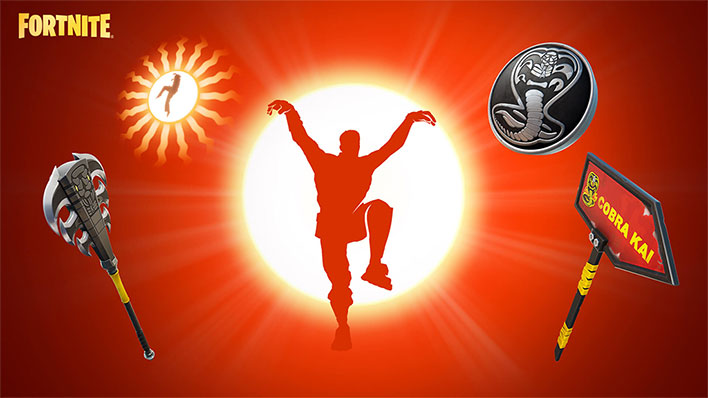 Fortnite players will also find and assortment of accessories, both individually and as part of the Cobra Kai Gear Bundle. And of course you can choose a side with Teachings of Miyagi and Cobra Coin back bling (as shown above). There's also a Dojo Logo Pickaxe and Cobra's Curse Pixaxe (also shown above), depending on your allegiance.
The ten outfits are split evenly between male and female skins, each available in their own bundle for 2,000 V-Bucks ($20). If buying the outfits individually, the cost is 800 V-Bucks ($8). As for the new gear, you can purchase the bundle for 1,500 V-Bucks ($15), or buy the items individually, with prices ranging from 200-800 V-Bucks ($2-$8).
If you haven't seen it yet, Cobra Kai is highly entertaining and gets better with each subsequent season on Netflix (or at least that the case from seasons 1-3, as I haven't watched season 4 yet).