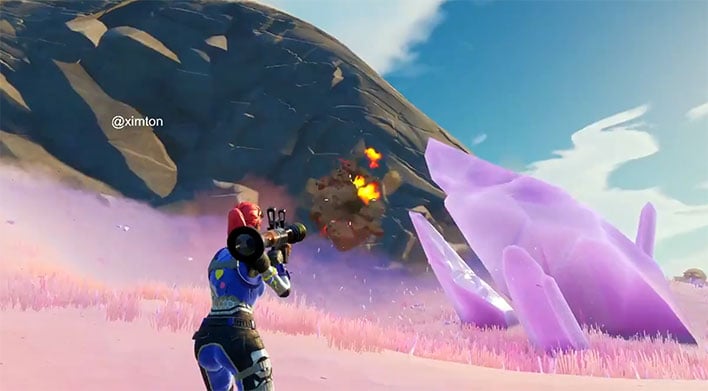 Fortnite is known for some silly weapons, such as a snowball gun or a grenade that makes players dance. It seems the developers at Epic Games are up to no good again, with recent leaks showing off two new guns. Fortnite leaker @ximton on Twitter showed off videos of what looks like a minigun with explosive ammo and a rocket launcher that launches explosive trolls. What exactly is Epic Games doing with these crazy weapons?

The first weapon we got a glimpse of was the troll launcher. It looks like it fired four rockets after every reload, but other than that, we do not know much. @ximton explains that it “launches explosive trolls,” but Epic may have scrapped the weapon. It would be neat to see this come to Fortnite, though, as if it does not damage buildings or players, it would be an interesting way to trick people. It looks just like a regular rocket launcher, so people would fear it if it came flying their way.

This is the biggest dark horse of a weapon we have seen so far. @zimton calls it the “TinStack” weapon that is possibly unfinished or a work in progress. It looks like a futuristic minigun with explosive ammo.

It also looks incredibly overpowered right now, so I would like to think that it is unfinished because being on the receiving end would be miserable as it stands.

Where Is Fortnite Going With These Weapons?

With these leaks, it seems Fortnite is tinkering with weapons. Perhaps the troll launcher and TinStack weapons are just developer weapons for testing purposes. What would Fortnite need to test, though? Another Fortnite leaker, @HYPEX on Twitter, sent a tweet saying that Epic Games may be working on weapon modding. Perhaps players will be able to add scopes, larger magazines, or other random attachments to affect weapons. This would require extensive testing, and developer weapons may be needed for this.

We might get a new weapons mechanic at some point, epic started testing a new thing called "Weapon Mod Slots" lately and it seems like it gives the weapon abilities/attachements.

Ultimately, we will have to see what comes of these leaks in the future, if anything. The weapons found may be just for testing or developers having some fun as there is limited information about them. It could also all be part of a more significant update coming soon, though, so keep your eyes on HotHardware for further Fortnite news. Also, let us know what you think of these weapons in the comments below.