Floppy Disks Had A Remarkably Long Run But Is The Storage Medium Finally Ready To Retire?

Floppy disks have been around for decades—over 50 years!—and while the storage medium is largely obsolete, it's not completely dead. Just ask Tom Persky, who after several decades still maintains a thriving business selling floppy disks to customers even though the industry at large has moved to solid state drives (SSDs) and USB flash drives.
For some of you reading this, your only experience with floppies might be the 'save' icon in Word and other programs. To the average consumer, floppy disks have not been relevant for a long time. Your PC might not even have an optical disk drive these days, let alone a 3.5-inch or 5.25-inch floppy drive. So how is Persky still making money selling disks from an earlier era in computing?
In an interview with Eye on Data, the self-proclaimed "last man standing in the floppy disk business" explains how he got into the business two decades ago. He started initially by duplicating disks, which he says "was as good as printing money" in the 1980s and 1990s. "It was unbelievably profitable," he says.
Then over time, he started selling blank disks. This wasn't feasible in the early going because floppy disks were readily accessible at most computer stores. But as larger companies moved on from selling floppies or went out of business, he and his website floppydisk.com picked up sales that otherwise would have gone elsewhere.
"So here I am, a small company with a floppy disk inventory, and I find myself to be a worldwide supplier of this product. My business, which used to be 90% CD and DVD duplication, is now 90% selling blank floppy disks. It’s shocking to me," Persky explains. 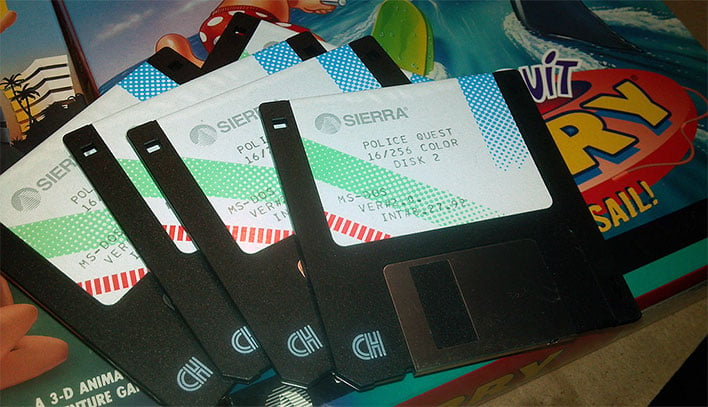 Long before Steam and digital downloads and even CDs/DVDs/Blu-rays, games shipped on floppy disks

It also helps that he stocked up on floppy disks before manufacturing left the medium behind. Persky says his last big order came around a decade ago, when he purchased a "couple million" floppies. He has about 500,000 left, mostly of the 3.5-inch variety—the most popular—but also 5.25-inch, 8-inch, and some other rare varieties. Sometimes people will reach out to Persky to sell or gift floppies found from cleaning out a garage or when a relative like a grandfather passes away.
As for who still buys floppies, his clientele consists mostly of industrial customers—airline industry, medical, and so forth—and hobbyists (check out this orchestra of 512 floppy drives).

"The biggest customer of all is probably the embroidery business though. Thousands and thousands of machines that use floppy disks were made for this, and they still use these," Persky says.
It's a fascinating interview that covers a range of topics related to the floppy disk business, including how much longer Persky expects to selling floppies. "There's a constant flow [of sales]. I expect to be in this business for at least another four years," he says.