Ferrari is finally stepping in the ring of vaunted digital concept cars as part of Sony PlayStation's latest Gran Turismo 7 video game. Fans of Sony's Gran Turismo game series have been treated to virtual concept cars over the past decade from marques such as Audi, McLaren, Bugatti, and more. Missing for the longest time has been the Italian Prancing Horse, but the wait is over. As part of the 75th anniversary celebration of Ferrari's first racing car, the 125 S, the brand revealed the simply named Ferrari Vision Gran Turismo.

The closed-wheel single seater was penned by Flavio Manzoni and his team at Ferrari Centro Stile, taking inspiration from the 24-hours of Le Mans and Daytona prototypes from the 1960s and 70s. Power is a potent 1336 hp from a hybrid twin-turbo V6 paired with two electric motors in each front wheel, and one for the rear axle. The carbon fiber shell is remarkably flat, with sharp edged bow and stern airfoils that blend the headlights and taillights into the bulbous wheel arches. Top speed is rated 217 mph (350 km/h), and the sprint to 60 mph is under 2.0 seconds. 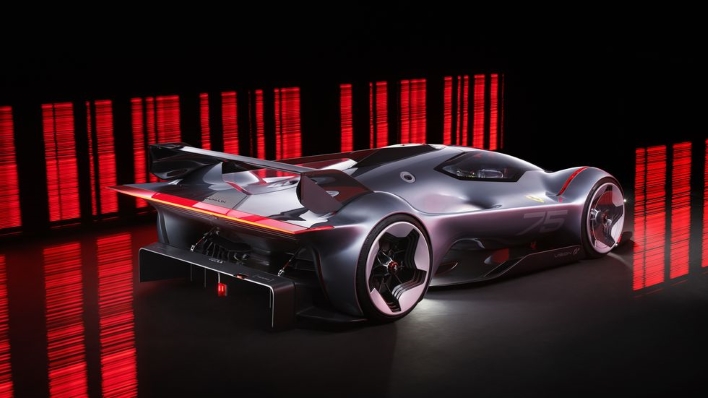 There are hints that this is more than just a virtual exercise, with elements pointing to the design and technical direction Ferrari wants to go with its cars. The engine and AWD system on the Ferrari Vision Gran Turismo exists in their latest Le Mans 499P hypercar, even if that version is scaled back in terms of power due to sporting regulations. The lighting scheme front and back also shares many similarities.

In terms of availability, the Ferrari Vision Gran Turismo will be in GT7 for users on December 23, 2022. Sony will give one user the chance to drive the car one week early. Moreover, all GT7 players will be able to have this car added to their garage on December 15th if they answer a Viewer's Campaign quiz correctly in-game by December 4th.