Apple's iPhone is the most popular smartphone family in the world, which makes it rather odd that the devices are still relying on the aging and slow Lightning port standard. Not for long, though. The European Union has mandated a change to USB-C, and former Apple exec Tony Fadell thinks the move is long overdue. He's on Twitter extolling the virtues of USB-C and calling out his former employer for dragging its feet.

Fadell rose to technology stardom as the father of the iPod, one of Apple's first hits after Steve Jobs returned to the company as CEO in the late 90s. As he points out, he was behind the venerable 30-pin connector that Apple debuted with the iPod and continued using on the original iPhone. He also worked on Apple's MFi Lightning licensing program. So when he says the EU was right to enforce USB-C, you can take him at his word. "They’re simply forcing Apple to do the right thing, according to Fadell.

According to Fadell, the move to USB-C is good for both technology and the environment. Of course, Apple knows that. It was among the first to move to USB-C for laptops, and most of its iPad tablets moved to the new port in recent years. 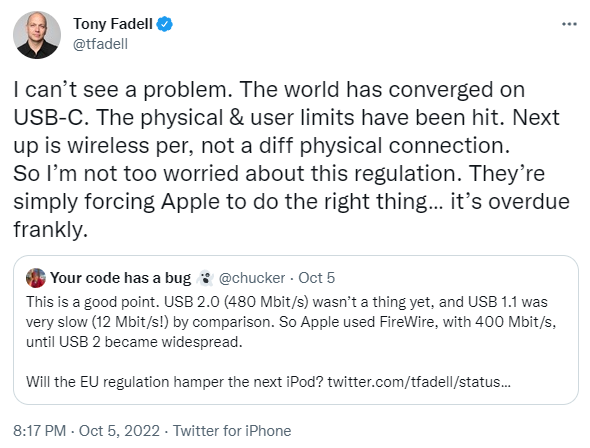 Some Twitter users complained that the wheels of government move slowly, and the USB-C mandate might slow Apple's adoption of a newer standard later, but Fadell shot that down. Fadell says that Apple was leveraging its market power to keep MFi licensing alive, and regardless, he believes the next major step forward will be wireless standards rather than a new physical connector. USB-C can operate up to multiple gigabits per second and over 100W of power, so it's as close to future-proof as a cable can get right now.

The EU is still in the process of implementing the requirement, which covers more than just Apple. Once the new rules are published, manufacturers of smartphones, tablets, and other electronic devices will have two years to move to USB-C if they want to sell devices in EU countries. Apple is rumored to be testing a USB-C version of the iPhone, and it may release one next year, a full year ahead of the cutoff.