The big unveil at Apple's WWDC 2022 event earlier this week was its next-generation M2 processor. Apple introduced a base variant, not a flagship slice of silicon, though speedier versions will inevitably come at some point. The first of those, a presumed M2 Pro model, could arrive relatively soon if the latest chatter turns out to be true.
Apple is not talking about an M2 Pro, M2 Max, or M2 Ultra yet, but it's a safe bet that the road doesn't just begin and then end at the base model M2. As to what's on tap, the folks at 9To5Mac say they've seen a report from analyst Jeff Pu of Haitong Intl Tech Research indicating that an M2 Pro processor will go into mass production later this year.
Finer grain details about the eventual M2 Pro are fairly light at the moment, though apparently it will be manufactured on TSMC's 3-nanometer node.
For reference, the base M2 that was introduced this week is built on an enhanced 5nm node at TSMC. It packs over 20 billion transistors, which is a 25 percent bump over the base M1 model, and rocks an 8-core CPU paired up with a up to a 10-core GPU and 16-core Neural Engine. 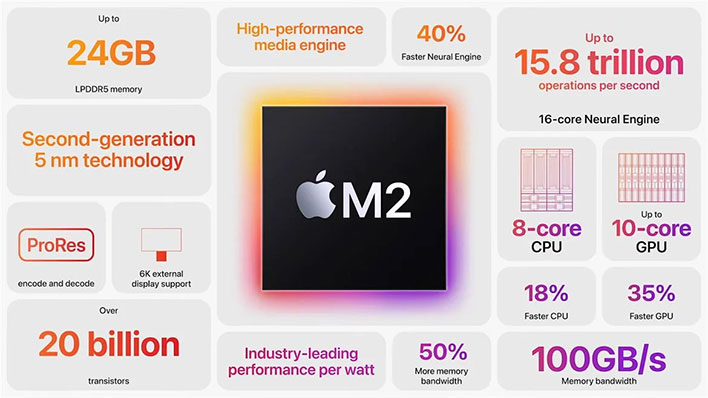 Here's a high level comparison of M1 and M2...
The M2 retains the same CPU core configuration as the M1, splitting them evenly between high performance and high efficiency cores. However, Apple is claiming an 18 percent performance uplift in multi-threaded workloads, and on the graphics side, up to 35 percent better performance.
There are other nuances that separate the M2 from the M1 as well, like a bump in max memory from 16GB to 24GB, and double the memory bandwidth at 100GB/s. And while still a 5nm part, Apple is calling it a second-generation 5nm node.
Should the M2 Pro move to a 3nm node as rumored, it could be an even bigger leap in power and efficiency over its predecessor. Time will tell. According to the same site, the M2 Pro will find its way to a new and more powerful Mac mini (codenamed J474) with a 12-core CPU (8+4).
That would be enticing, given what we observed in our M1-powered Mac mini review in 2020. We were left fairly impressed with its performance and capabilities at a relatively lower power draw.