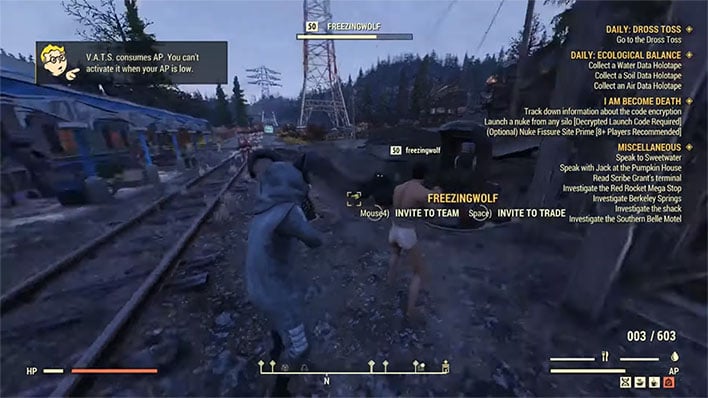 Make no mistake, if the apocalypse comes to be, we are all going to be left in a cutthroat world where anything goes. Fallout 76 plays on that theme, to an extent, though an annoying hack is taking things to the extreme and ruining the game on PC. The hack allows players to steal items from another person's inventory, including weapons and armor.
This is not done through person-to-person trading, but is accomplished by way of a remote hack. What's particularly frustrating is it only requires the hacker to be in the vicinity of another player. As long as the victim can be seen on screen, that person can be stripped of their items (save for caps, scrip, access to various locations, and stash box/scrap box items).
"Since there is no way of knowing what player is using the hack, the only way to avoid it, is to not play on a public server. If you or friends of yours have a Fallout 1st subscription, you might want to stick to playing on a private server for a while. If you do play on a public server, it might be beneficial to store your best weapons and armor. (Or maybe switch to that lower level character you've got lined up and don't really care about that much yet.)," a user on Reddit explains.
There's a video making the rounds of the hack in action, whereby a player spends nearly 9 minutes wandering the map and stealing items from unsuspecting victims. Check it out...
Having your items stolen in this manner and being left virtually naked is not a fun experience, but it's happening to Fallout 76 players. The question is, what will Bethesda do about it? That's difficult to answer right now.
Presumably, Bethesda will issue a fix. What's less clear, though, is if it will make any efforts to return stolen items to players. One user on Reddit asked Bethesda about this and got a reply that most players are not going to be happy with.
"Please be aware that due to tool limitations Customer Support is unable to restore lost items," Bethesda said.
As some have pointed out, Bethesda does have the ability to roll back characters, which would restore stolen items. So while Customer Support may have their hands tied, Bethesda's developers should be able to make things right. Hopefully they will choose to do so.