Facebook founder and CEO Mark Zuckerberg published an article today that says one of the main goals of the social network in 2020 is to build "much stronger privacy protections for everyone on Facebook." Zuckerberg says that Facebook knows it has a lot of work to do in that realm, which is why it's making it a priority not only for the teams at Facebook but for Zuckerberg personally. Since today is Data Privacy Day, Zuckerberg says that he wanted to share some of the work his company is doing to give users more control over privacy both on and off Facebook.

Over the next few weeks, Facebook will start showing nearly 2 billion people around the world a prompt encouraging them to review privacy settings. The prompt will show up in the user's Newsfeed and direct them to the Privacy Checkup tool that was recently updated. The tool makes it easier to adjust who can see posts and profile information. It also helps to strengthen account security by turning on login alerts and reviewing information shared with apps that users have logged into with Facebook. 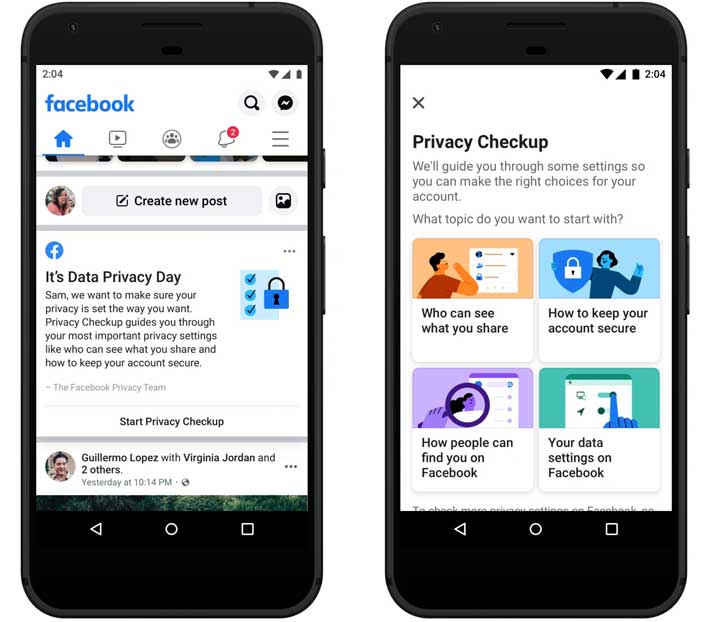 Today marks the launch of a new Off-Facebook Activity tool that is available to people on Facebook around the world. Facebook says that other businesses send it information about your activity on their sites, and that information is used to show ads that are relevant to users. The new tool allows users to see a summary of that information and clear it from your account if desired. Zuckerberg says the feature marks a "new level of transparency and control." He says that the social network has been working on that feature for a while, noting some systems had to be rebuilt to make it possible.

Facebook Login allows users to sign in to other apps and services using their Facebook account. To enable people to keep track of that activity, it rolled out Login Notifications earlier this month. The notifications are intended to alert users when they use a Facebook Login to sign in to third-party apps so users can stay aware of how their account is used and edit settings. Zuckerberg says that the user should be able to easily understand and manage information, which is why Facebook is strengthening privacy controls. He also notes that more details will be shared as new progress is made on privacy in the decade ahead.

In other Facebook news, Facebook banned deepfakes from its platform earlier this month as the presidential election race heats up. Mark Zuckerberg says the new feature marks a "new level of transparency and control."