The battle for paying new publishers in Australia has ramped up today after Facebook took some drastic measures. The social media company has now blocked Australian news from being shared on the platform globally after the threat of new rules loomed from the country's government. Interestingly enough, this action has swept up unrelated Facebook pages in the ensuing commotion.

Yesterday, Facebook made a blog post about the proposed "Media Bargaining law," claiming that it "fundamentally misunderstands the relationship between our platform and publishers who use it to share news content." As the Australian government contemplates the law, Facebook was left with the choice of preparing to comply or stop allowing news content on Facebook services in Australia. It chose the latter.


Facebook came to this conclusion because "publishers willingly choose to post news on Facebook, as it allows them to sell more subscriptions, grow their audiences and increase advertising revenue," and thus, the Australian government should not drag Facebook under with the new law. To back this up, the company claims that "Facebook generated approximately 5.1 billion free referrals to Australian publishers worth an estimated AU$407 million." 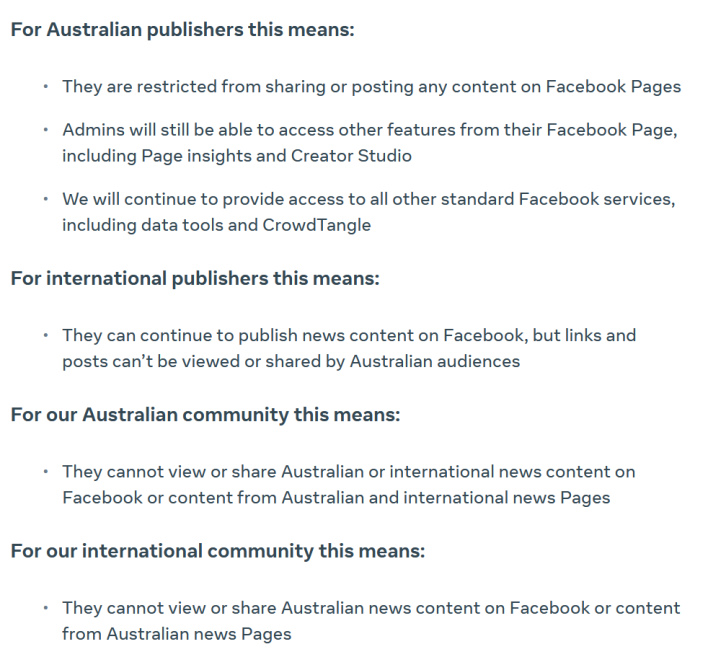 In what may be a poor choice of words, the blog post states that the new proposed law "seeks to penalize Facebook for content it didn't take or ask for." Whatever side you take, "people and news organizations in Australia are now restricted from posting news links and sharing or viewing Australian and international news content on Facebook." Furthermore, "Globally, posting and sharing news links from Australian publishers is also restricted."

Interestingly, according to comedian Andrew Brown, Facebook banned its page in the sweeping changes to the platform, which you can see above. Other non-news Facebook pages were taken down as well, such as ones for charities, community support, and Australian government pages providing weather updates and other public services.

Facebook has effectively table flipped out of Australia with actions that are now affecting the rest of the world. Perhaps Facebook will come back to the Australian government to negotiate, but this is not a good look overall. We will have to see if anything changes in the coming days as users begin to feel the change's impact, so keep an eye on HotHardware for updates.