The European Space Agency (ESA) delivered a powerful message to Russia as it states it is "very unlikely" the ExoMars program will launch in 2022. The statement was made February 28th in response to Russia's invasion of Ukraine.

The ESA was scheduled to try and launch ExoMars, a collaborative mission with Roscosmos, later this year. The mission sought to land a rover on the Red Planet alongside NASA's Mars rover and a Chinese rover. The mission was initially set to launch in 2020, but the pandemic and technical delays caused it to be pushed back. The joint mission was intended to search for organic molecules, along with any possible signs of life on Mars. In light of the sanctions being imposed against Russia for its invasion of Ukraine, the ESA released a statement in regard to its upcoming joint mission with Roscosmos.

"We are fully implementing sanctions imposed on Russia by our Member States. We are assessing the consequences on each of our ongoing programmes conducted in cooperation with the Russian state space agency Roscosmos and align our decisions to the decisions of our Member States in close coordination with the industrial and international partners (in particular with NASA on the International Space Station)," the ESA said in its statement on Monday. 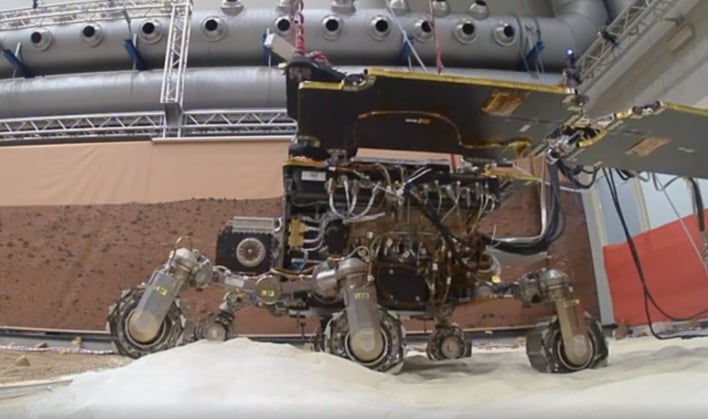 In the statement, the ESA also makes note in regard to the Soyuz launch campaign from Europe's Spaceport in Kourou. The agency said it will take note of the Roscosmos decision to withdraw its workers from Kourou, and will therefore assess for each European institutional payload under its responsibility. This takes into account launch systems that are currently in operation such as the upcoming Vega-C and Arianne 6 launchers.

ESA delivered a very clear message at the very start of its statement when it came to the Russian invasion of Ukraine. "We deplore the human casualties and tragic consequences of the war in Ukraine. We are giving absolute priority to taking proper decisions, not only for the sake of our workforce involved in the programmes, but in full respect our our European values, which have always fundamentally shaped our approach to international cooperation," the space agency proclaimed.

The ideal opportunity for launching a spacecraft making its way to Mars only happens once every 26 months, which could mean a very lengthy delay for the ExoMars mission. ESA's Director General will evaluate all the options and prepare a formal decision moving forward by ESA Member States.