The Kingpin line of GPUs from EVGA is generally regarded as beastly and over the top. Following the launch of the NVIDIA GeForce RTX Ampere line of cards, this generation will be no different. The GeForce RTX 3090 is getting the Kingpin treatment from EVGA, and holy smokes, it is certainly shaping up to be a beast.

Vince Lucido, better known as the man behind Kingpin Cooling, has been working with EVGA on the Kingpin line of cards since the GeForce 780 Ti era. The Kingpin line of cards typically come decked out with robust cooling solutions, superior power phase design, and higher clock speeds than other cards. The GeForce RTX 3090, while already beastly based on reviews such as our own, can be made even more powerful by cooling it with a 360mm radiator, as seen in Lucido’s photo up top. 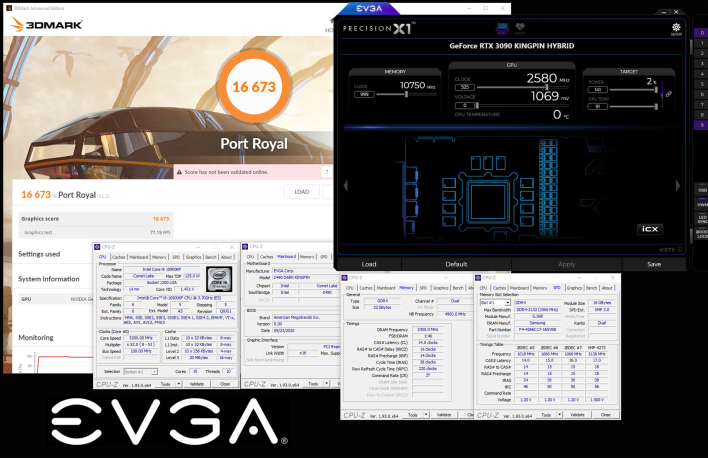 Also, on the Kingpin edition of the GeForce RTX 3090, you will find a flip-up rear-mounted screen for monitoring the temps if you get into overclocking the thing. While you will not get ridiculous numbers with water cooling, if you step into the realm of crazy called LN2 (liquid nitrogen) cooling, you may be able to overclock like the Kingpin himself. Using the Kingpin card with LN2 cooling, Lucido cracked the number one spot for single GPUs on the 3DMark Port Royal benchmark with roughly 2,000 more points than the number two spot. He also hit 2.55 to 2.58GHz on the GPU, which is above the next contender on the leaderboard. He states that he “Can't wait to see what some of you can do with it, this is nothing yet,” so likely there is some more power to be milked from the card.


In the past, the Kingpin card line has always been an impressive piece of tech, and it appears this track record is not going to change any time soon. We are excited to see what comes of the GeForce RTX 3090 Kingpin card, and hopefully, we can get one in-house to show off the raw horsepower when EVGA gives out more details sometime soon.
(Images courtesy of Vince "K|ngP|n" Lucido's Facebook Page)