EVGA might be best known for its graphics cards, but it is getting ready to offer a bodacious prebuilt PC dressed to the nines in high-end hardware, and packaged in one of the most unique cases we have ever seen. Actually, we probably shouldn't even call it a case—it's a carbon fiber frame with a cable suspension system.
The E1's frame is not the first open air chassis, of course, but it definitely puts a unique spin on the concept. EVGA says it has a patent pending on the independent suspension system, with steel cables attached to a frame constructed with 100% 3K plain weave carbon fiber. The contraption weights 2.76 pounds, giving EVGA bragging rights for having "the lightest frame design compared to other chassis of the same volume."

The full list of specifications of has not yet been announced, though EVGA did tip a few pertinent components. Chief among them is a Kingpin GeForce RTX 3090 Ti graphics cards based on the new flagship SKU that NVIDIA announced at CES. It's nestled into a Z690 Dark Kingpin motherboard, so obviously this is an Alder Lake PC, despite no mention of the CPU (almost definitely a Core i9-12900HK).

It also sports a 1,600W Titanium power supply unit with a 3K carbon fiber finish and what look to be a pair of 7th gen closed loop liquid coolers, one for the graphics card and the other for the processor. There's no mention of RAM or storage. 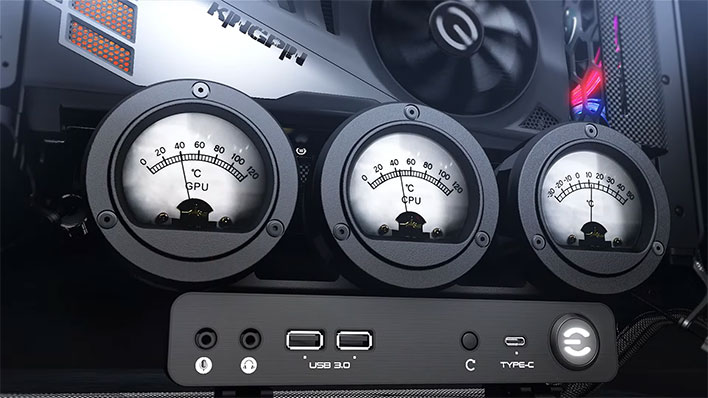 The other unique feature is a set of analog gauges at the bottom. These provide racing-style monitoring of CPU, GPU, and system temperatures. There's an I/O panel directly underneath with separate 3.5mm headphone and microphone jacks, two USB 3.0 Type-A ports, a USB Type-C port, and a power button.
There's no mention of price, only that the EVGA E1 will be "extremely limited" and exclusively available to EVGA members. It will come with a limited edition keychain as well.