Just a few days ago, Epic Games founder and CEO Tim Sweeney likened Apple's power to banish apps from its App Store to a "death sentence" for the product in question, a notable description considering Fortnite was recently given the boot. While perhaps the banishment does not sound the death knell for Epic Games or Fortnite, the developer is projected to lose a lot money from Apple's decision—nearly $27 million each month.

Fortnite is free to play, but rakes in a ridiculous amount of revenue through in-game purchases on cosmetics and other items. Players can optionally buy in-game currency called V-Bucks using real-world currency. Regular pricing for Fortnite's in-game currency ranges from $3.99 for 600 V-Bucks on up to $79.99 for 13,500 V-Bucks.
According to Buy Shares, a relatively new "financial educational hub for both beginners and experienced investors," Apple's banishment of Epic Games from the App Store could cost the developer an average of $26.7 million per month in lost revenue. The estimate is based entirely on the money Epic Games makes from Fortnite. Here's a look... 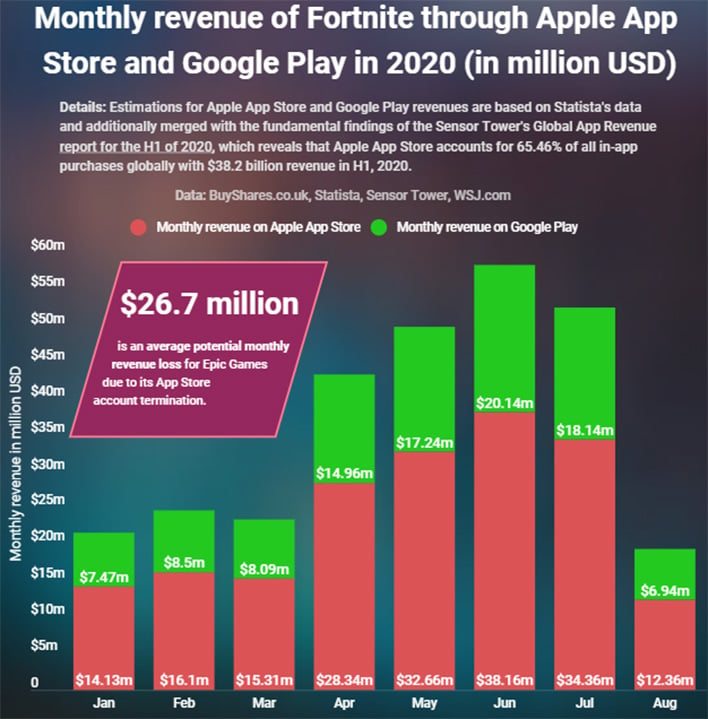 "Between January and August this year, Epic Games’ highest revenue was from the App Store at an estimated $191.42 million compared to $101.48 million from Google Play. Based on Sensor Tower data we have determined that the App Store accounts for 65.46 percent of all in-app purchases globally in H1, 2020. Our estimation, therefore, filtered the cumulative revenue for Fortnite on Google Play and Apple App Store by using our finding of 65.46 percent when comparing Google Play and App Store revenue, Buy Shares says.
That is a huge chunk of change for sure, though it won't bankrupt Epic Games, which is estimated to have collected $1.8 billion in Fortnite revenue last year. Still, it is enough to make a major dent. Over the course of the year, the average monthly loss adds up to more than $320 million—ouch!
This all stems from a dispute over in-game purchases. Epic Games grew tired of Apple's 30 percent royalty cut, and updated Fortnite to allow players to make in-game purchases that side-stepped the App Store (which in turn side-stepped Apple's owed royalties).
Apple responded by banishing Fornite and ultimately terminating the developer's App Store account, despite a recent ruling saying Epic Games could stay for the time being (but not Fortnite).
How this ultimately ends is anyone's guess. However, it is likely to get even uglier (and costlier) before a resolution is reached.