The United Nations is challenging the world's richest individuals—billionaires like Amazon founder Jeff Bezos and Tesla founder Elon Musk—to allocate a portion of their vast wealth to make a sizable dent in world hunger. By the UN's math, around $6 billion would have a huge impact. In response, Musk issued a challenge of his own on Twitter, saying if the UN can prove that a $6 billion cash infusion would solve world hunger outright, he'll sell off that amount of Tesla stock immediately.
Musk can certainly make good on his promise, if he actually decides to dump billions of dollars worth of Tesla stock. At its current valuation (a little over $1,200 per share), Musk is worth in the neighborhood of $335 billion, ranking him as the richest person on the planet. Bezos, the second-richest person, is worth around $143 billion.
The promise to sell off $6 billion in stock came on the heels of UN director David Beasley calling on Bezos and Musk to "step up on now, on a one time basis," during an interview with Becky Anderson on CNN's Connect the World. According to Beasley, $6 billion would be enough to "help 42 million people that are literally going to die if we don't reach them. It's not complicated."

A donation of that magnitude is certainly massive, but also less than 2 percent of Musk's net worth, as was pointed out by Dr. Eli David on Twitter. In the same post, David also called into question Beasley's misconstrued claim, noting that in 2020, the UN World Food Program (WFP) raised $8.4 billion without solving world hunger. This prompted a reply by Musk. 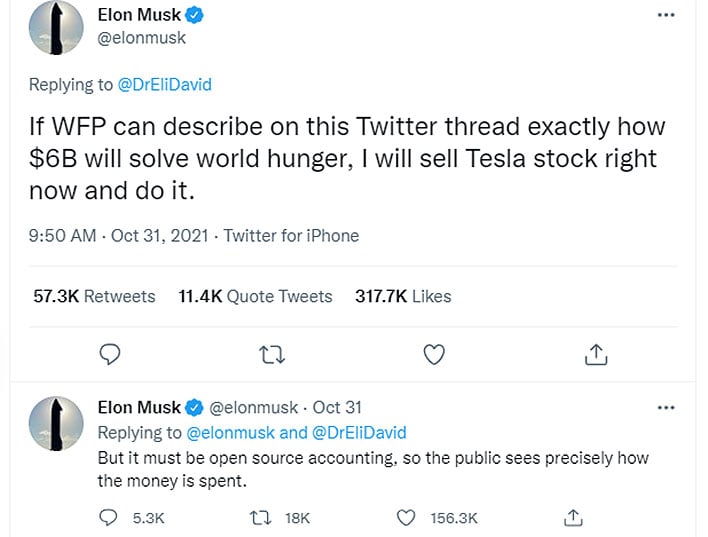 "If WFP can describe on this Twitter thread exactly how $6B will solve world hunger, I will sell Tesla stock right now and do it," Musk wrote. "But it must be open source accounting, so the public sees precisely how the money is spent."
Beasley responded by saying the original headline from the interview was not accurate, adding that $6 billion would not actually be enough to end world hunger in its entirety. However, he said "it WILL prevent geopolitical instability, mass migration, and save 42 million people on the brink of starvation. An unprecedented crisis and a perfect storm due to Covid/conflict/climate crises."
So no, Musk is not likely to end world hunger with a hefty donation, but that was not necessarily the end of the discussion, or potential pledge. There was a bit of a back and forth between Beasley and Musk in the Twitter thread. Beasley invited Musk to sit down and discuss the matter, to which Musk urged the director to publish current and proposed spending details for all to see.

Musk also linked an article alleging UN officials sexually preyed on starving children in exchange for food and asked, "What happened here?," so we're not super confident that anything will arise from this back and forth. But, we'll see what happens.