By most measures, Elon Musk is the richest person in the world, and he's got more liquid assets at his disposal today. Recent regulatory filings show that Musk has sold off millions of Tesla shares worth billions of dollars. He needs those funds due to a questionable decision made earlier this year when he agreed to purchase Twitter for $44 billion, an agreement he's currently trying to void. But better safe than sorry.

Musk's Twitter saga began in early 2022 with the news he had secretly acquired a 9.2 percent stake in the social media site where he has more than 100 million followers. After rejecting an offer to join the Twitter board, Musk tendered an offer to purchase the company outright, waving due diligence in the process. That's coming back to bite him.

A primary source of Musk's wealth is his cache of Tesla stock, which declined in value after the announcement of the Twitter deal. That's also when he started publicly questioning the official figures for bot accounts on Twitter, which the company claims are around five percent. Musk demanded access to data that could prove that claim, and then claimed he was pulling out of the deal. That kicked off a court battle, which is currently scheduled to go before a judge in October.

The value of Tesla stock has been trending upward lately. While it's not back to its pre-Twitter peak, it's at nearly $900 per share today. Musk has filed six notices with the Securities and Exchange Commission (SEC) disclosing the sale of 7.9 million shares of Tesla stock, giving him a cool $6.9 billion in cash. 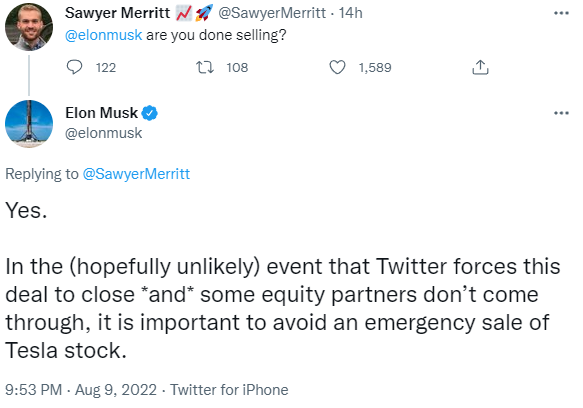 On Twitter, Musk claims he's done selling shares for now, confirming these moves are due to the Twitter deal. The added liquidity could come in handy if the court forced Musk to abide by the terms of the deal he signed, which requires him to personally pay $21 billion of the purchase price. The rest would come from loans and equity partners. While Musk still seems to want out of the deal, he said it's important to "avoid an emergency sale of Tesla stock."

Twitter is still keen to sell itself to Musk, and its stock price is rising as some have begun to suspect the parties will come to an out of court settlement. That could mean the deal will go through with some modifications or Musk will be forced to cough up a breakup fee.