Drones Now Being Used To Transport Organs And Save Lives, Beat That Prime Delivery

In a “proof of concept” flight, Unither Bioelectronics delivered donor lungs in a way that should make the likes of Amazon envious. The lungs were in fact delivered via a drone from Toronto Western Hospital to Toronto General Hospital in just about six minutes.

This may sound like a simple feat with how common the use of drones has become in our everyday life. But that is nowhere near the truth in a circumstance like this. Along with having to coordinate the flight itself and medical personnel at both hospitals, a special drone had to be designed that could house and fly a set of human lungs safely.

The 18 months it took to create this drone included making a lightweight carbon fiber container that could withstand vibrations and in-flight changes to elevation and barometric pressure that could potentially damage the donor lungs. The drone and container were also outfitted with a parachute and advanced GPS system to add further safety precautions.

Transplant organs have been transported in the past by a drone, but this was the first set of lungs to do so. Lungs and hearts have a much shorter window of viability than other organs. Human lungs can only last four to six hours in transit, making every single minute extremely vital. Having the ability to avoid the congestion of a major city is something that could mean the difference between the lungs being transplanted into a patient, and going to waste. 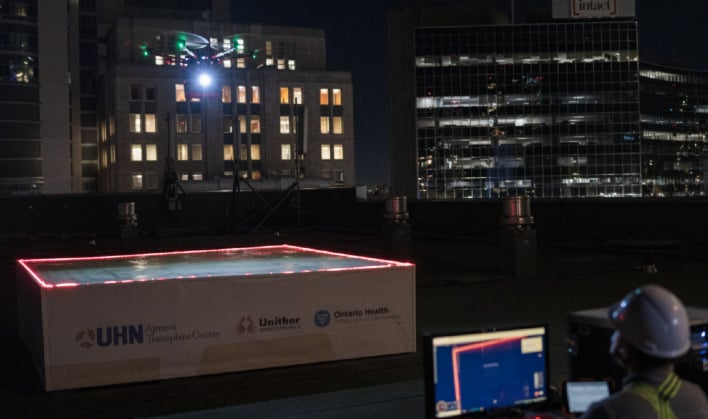 Unither Bioelectronics is continuing to develop this drone technology and is working toward a unit that can travel even further in the future. Martine Rothblatt, PHD, CEO of United Therapeutics, said, "Our other aviation strategy at United Therapeutics is to extend the range of drone aircraft. We are now building drones that can fly 100 miles, and then 200 miles. Ultimately, we plan to have droned aircraft deliver lungs, hearts, and kidneys throughout all of North America."

It is always exciting to see companies innovate in ways like this. This is technology that could potentially save many lives. With donor organs falling shorter in number in comparison to patients in need, every ounce of technology that could prevent a single donor organ from going to waste is simply amazing. There is no doubt the patient who received this historic pair of lungs would agree.