Doom Eternal's next and final DLC, The Ancient Gods – Part 2, comes out tomorrow and should be a hell-razing good time. Developer iD Software announced the expansion with a tweet and trailer, which you can see below, but at the end of the day, the “war against Hell ends here.”

The Ancient Gods – Part 2 follows Doom Slayer after he has “saved Earth from demonic corruption, defied all-powerful gods from beyond the cosmos and awoken an ancient evil for one final confrontation.” With this final fight, iD explains that players must “Unite the Sentinel armies and take the war to the stronghold of the Dark Lord himself in one last effort to seal away evil once and for all.” 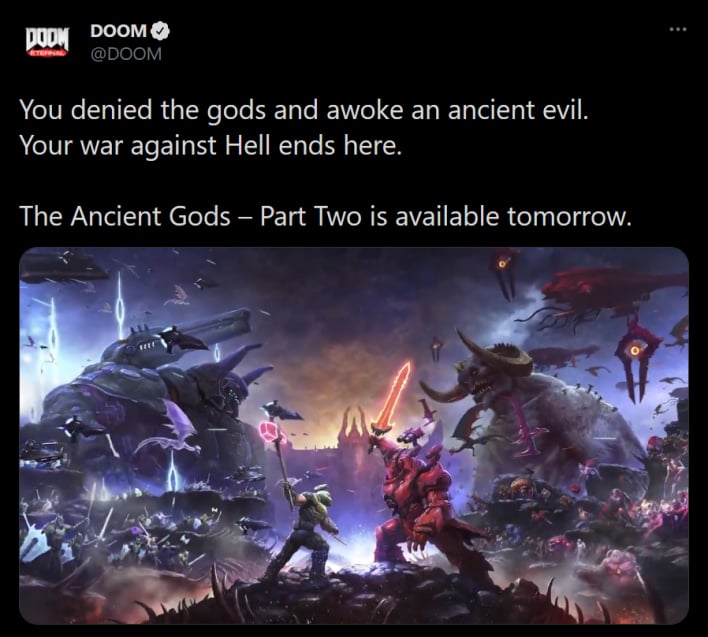 Shown in the trailer, Doom Slayer gets his hands on a hammer called the Hellbreaker which will let them “rip, tear and now smash every demon in his path across ancient Sentinel settlements, devastated Earth cities and beyond, tackling stronger new enemy variants as he nears his final battle.”
Overall, it seems this DLC has taken some modern and magical influences with dragons and teleportation alongside destroyed cities. There even appear to be Dr. Strange-type portals that open up and bring people to the world. Whatever the case, it looks insane and a heck of a lot of fun to play. If you want to pickup the DLC, it will be available tomorrow as part of the DOOM Eternal Year One Pass or the Doom Eternal Deluxe Edition.