Id software recently announced that it was adding anti-cheat software to its popular game Doom Eternal. What id Software chose to go with to protect BATTLEMODE multiplayer gamers from cheaters was Denuvo, which requires kernel-level access to the host computer. Id Software has now promised to remove the anti-cheat technology from the game in its next PC update.

Denuvo was included in Update 1 that launched last Thursday. Executive Producer Marty Stratton has posted a community update on reddit that says since the update went live, the Doom Eternal team has been looking into reports of instability and performance degradation for some users. Stratton also noted that the team had seen the concerns from gamers around the inclusion of Denuvo software. 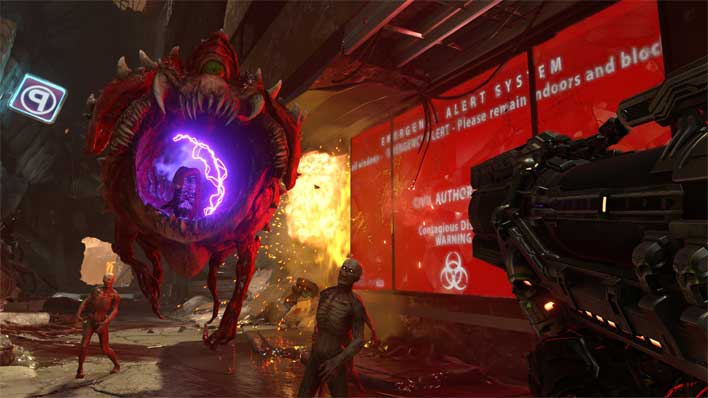 The reddit post offers information on actions the team is taking, along with context around why some decisions were made. Stratton makes it clear that a PC-only Update 1.1 will be coming hopefully "within a week" that will remove Denuvo software. As for why the software was chosen in the first place, one reason was to protect BATTLEMODE players from cheaters and establish a consistent anti-cheat system and processes as id Software looks forward to competitive initiatives based on BATTLEMODE.

Id Software also wanted to establish cheat protection in campaign mode now to prepare for the future launch of Invasion, which will be a blend of campaign and multiplayer modes. The post notes that kernel-level integrations are typically the most effective in preventing cheating, and the Denuvo integration met the company's standards for security and privacy. In examining any future anti-cheat software for Doom Eternal, id Software will "at a minimum" consider giving campaign-only players the ability to play without anti-cheat installed. The post also notes that performance and stability issues that players had complained about in the game since Update 1 launched weren't caused by the Denuvo software.

The team has fixed several crashes in the code related to customizable skins and identified and fixed several other memory-related crashes that should improve overall stability for players. Those fixes will come in the next update. Doom Eternal fans will be glad to hear that id software is listening to fans and is removing the anti-cheat software that many saw as a security exploit waiting to happen.