Dogecoin may have started out as a joke cryptocurrency, but some investors who took it seriously are laughing all the way to the bank. That's because it just hit a new high, surging 30 percent in the past 24 hours to reach $0.53 cents. A small amount compared to crypto like, say, Bitcoin and Ethereum, but bear in mind Dogecoin was trading for a fraction of a cent at the beginning of the year.
On January 27, Dogecoin was not even worth a penny, trading at $0.0075. But then it rose to over 3 cents the next day and trended at around 5 cents the following weeks, until mid-April when it jumped to around 40 cents, giving it a market cap of nearly $36 billion.
Several factors led to its rise, like the sudden interest in pushing up stocks like GameStop and AMC by the WallStreeBets community on Reddit. Tesla founder Elon Musk also played a big role—the influential Twitter user tweeted about Dogecoin (just as he had done with GameStop stock), which helped spur interest in the meme-coin. 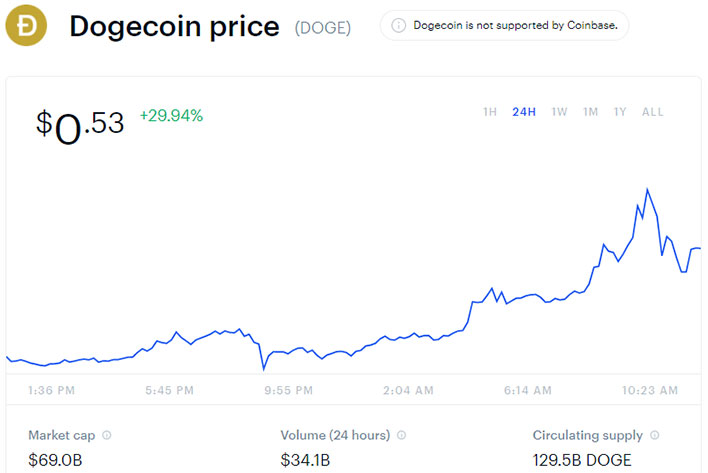 Dogecoin is up 30 percent in the past 24 hours, hitting a new high value (Source: Coinbase)

Dogecoin's value fell back some in the days to follow, to around 25 cents, but is now trading for more than double that amount, at 53 cents. That's a 30 percent gain in a single day, a 95 percent gain over the course of a week, a staggering 849 percent rise from a month ago, and an absolutely eye-popping 21,356 percent increase from a year ago.
Why the sudden rise again? Who really knows when it comes to cryptocurrency, but it has certainly helped that both Elon Musk and fellow billionaire Mark Cuban have spoken positively about Dogecoin on Twitter and in the media.
"Meme coins like Doge only work if they gain utility and users use them for that utility. As long as you can spend Doge, because we know it’s annual inflation rate is set at 5b coins, it can gain SOME value as the utility grows. It becomes like any other currency," Cuban stated on Twitter earlier this week.
In addition, Musk is set to host "Saturday Night Live" this weekend, and that could be playing into Dogecoin's rise as well. It would not be surprising if Dogecoin was somehow incorporated into a skit, and if that happens, we could see another big gain.
As it stands, if you had invested $1,000 into Dogecoin in January when it was worth $0.0075, it would be worth $70,666 today. And if anyone would have had the foresight to pour $1,000 into Dogecoin on this day seven years ago, it would be worth $1.6 million today. Anyone have a time machine I can rent?

Updated May 5th at 10:38am
Dogecoin is on another rocket ride this morning, as it is up another 23 percent $0.65. The cryptocurrency is up over 1,000 percent during the past month alone. 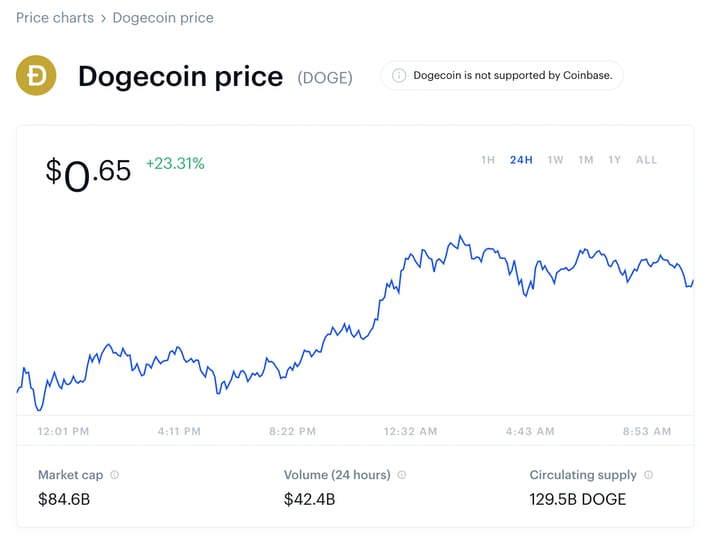