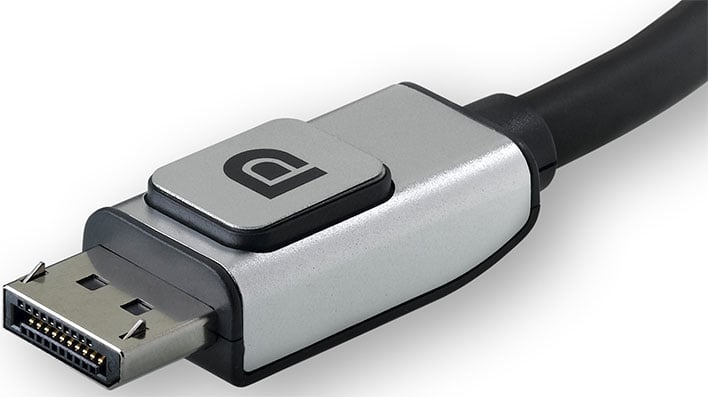 Out of everything that was announced at CES this year, there were no 8K resolution monitors sporting DisplayPort 2.0 connectors. It is not because display makers are shunning the standard. Quite the opposite—they plan to embrace it, when it becomes available. The big question is when, and the Video Electronics Standards Association (VESA) provided an update, saying the DisplayPort 2.0 specification will finally manifest later this year.

You might have forgotten all about the updated specification, and you would be forgiven for doing so. After all, it has been a little more than a year and a half since VESA published details about DisplayPort 2.0, which will offers triple the bandwidth of DisplayPort 1.4a. That added bandwidth is needed to drive increasingly higher resolutions, especially with HDR thrown into the mix.
The original plan was for DisplayPort 2.0 to manifest in products towards the end of 2020, but that did not happen.
"Monitors supporting DisplayPort 2.0 are currently in development, but none have been released to market yet," a VESA spokesperson told The Verge. "DisplayPort 2.0 is working now in new system chips that should appear in products later in 2021."
So there you go. Apparently the delay is the result of COVID-19, which in addition to claiming lives, has also disrupted various industries and the economy.
Waiting a bit longer for DisplayPort 2.0 products is obviously a distant concern compared to the loss of life caused by the virus, but there is a relation there. That's because the threat of the virus has prevented engineers and hardware developers from getting congregating several times a year at the PlugTest event, to discuss the standard and work out any issues.
"In 2020 VESA had not PlugTests, which has slowed the deployment of DisplayPort 2.0," the spokesperson added. "VESA is now planning our next PlugTest for this spring in Taiwan, so we expect to get the process rolling again."