My main PC typically hums along without issue (*knock on wood*), though one weird quirk I've not been able to solve is the occasional display flickering. This typically happens when I get up out of my computer chair and walk away. A loose connection, perhaps? I've tried unplugging and re-plugging the DisplayPort cable to no avail, and as it turns out, the issue might actually be related to the cable itself.
Our Editor-in-Chief Dave Altavilla tells me he experiences the same hair-pulling issue, without any logical rhyme or reason. Incidentally, we both have thinning hairlines, which are probably not related to this almost-random occurring annoyance. Or maybe they are—I had mostly given up on fixing the issue because it does not happen when I'm actually using my PC, until Dave stumbled onto a Reddit thread with a potential solution. In short, it amounts to swapping the cheap cable that came with our monitors, for a higher quality cable.

Apparently we are not the only ones in the world with flickering displays.

While obviously anecdotal, user "Lilkippah" says their Alienware monitor attached to an NVIDIA GeForce RTX 3080 graphics card was experiencing random screen flickering, sometimes every half hour or hour, and sometimes as frequently as every five minutes, until they replaced it with a CableMod cable on Amazon. After that, "not a single flicker."
The thread is new and so there are not a ton of responses, but already at least one other person has chimed in claiming that changing to a certified cable solved their flickering issue too. Could it really be that simple?
In a word, yes. And in more words, trying a different cable is pretty much Troubleshooting 101, when it comes to various PC problems. Though in this case, simply tossing aside that DisplayPort cable that came with your monitor and replacing it with a random one may not have an effect. The key here is to go with one that has been certified by VESA.
There are a couple of reasons why this is the case. We did some digging, and apparently one of the pins (#20) on some older DisplayPort cables is wired incorrectly. This pin provides some additional power (3.3V/500mA) for certain accessories. However, this can cause problems when connecting a monitor to a graphics card, if a cable maker did not follow VESA's specifications for pin #20.

That's one potential issue. The second one is that even more modern DisplayPort cables might be poorly made. If the one that shipped with your monitor is not VESA certified, there is a chance it could cause flickering and sync issues. Or so that is the assumption, based on anecdotal experiences.

A VESA-Certified DisplayPort Cable Could Solve Your Display Flickering Problem 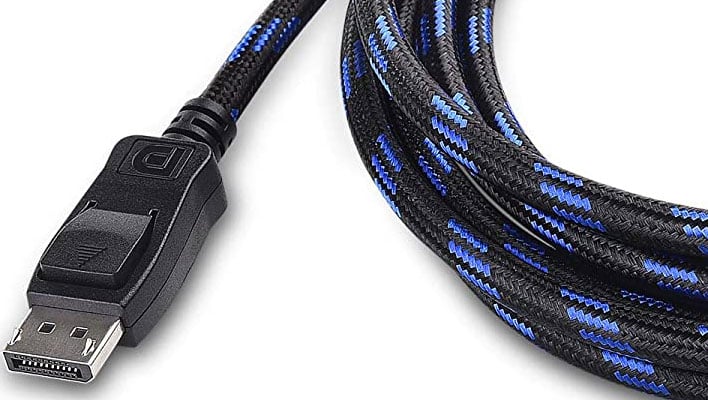