Yesterday, December 8th, was the annual awards ceremony celebrating the last year in gaming, the creatively named The Game Awards. While celebrating the innovations, music, and gameplay of the past year, many developers and publishers use this as an advertising opportunity for upcoming titles. Few garner as much attention as when Blizzard decides to show up and provide the very first look and release date for the upcoming Action RPG, Diablo IV.

While Elden Ring and God of War Ragnarök added to their stacks of awards this year, fans eagerly awaited game announcements. Diablo IV was one of the big ones, and thanks to the trailer, which you can view below, we now even know when Blizzard intends to release the game.

The visually beautiful trailer shows two massive armies at odds, one looking as though they are from divinity while the other is fraught with demons. Eventually the battle comes to a head with an angelic character obliterating the demons. As the trailer states, "All Hell Breaks Lose" on June 6, 2023. That's almost 23 years to the day since Diablo first hit store shelves back in June of 2000 and a little over 10 years since Diablo III launched. There's still no word on if there will be cows, though.

There is still some concern involving Blizzard's ability to smoothly launch games, considering Diablo III's launch and the latest World of Warcraft expansion were both rife with login issues for players. We can always hope the experience will be improved this time around, however unlikely. It does not always make financial sense to scale up server infrastructure at launch when most of the player base will bleed away within weeks. That's an inevitability regardless of how good the game is. 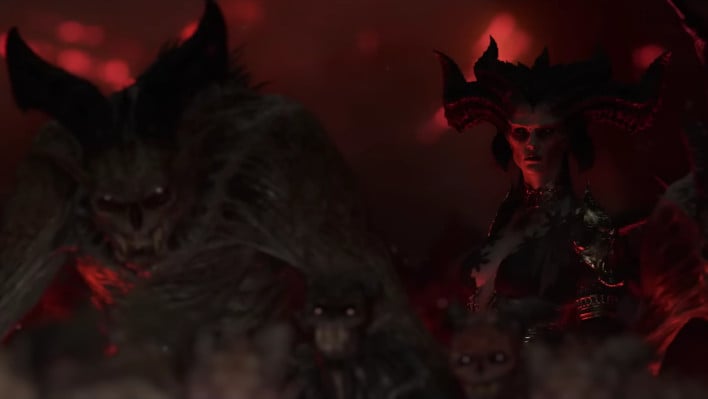 All in all, the trailer makes the newest title in the series look gorgeous. After the fiasco that caused Blizzard developers to get boo'd when announcing Diablo Immortal, along with an obvious money-grabbing tactic with that mobile title, we have some much higher hopes for Diablo IV.