As popular as it is, the practice of "remastering" old games is still a contentious topic. Some folks are positively gleeful seeing old favorites get a new coat of polish and quality-of-life features. Others are directly dismissive of old game remakes, citing new always-online requirements and the viability of the original release, maintained through the ages by faithful fans. Yet another faction is simply puzzled at the choice to spend time on rehashed releases (rather than all-new adventures).


Whatever your take on the issue, Diablo II Resurrected has been a popular re-release largely owing to fans' deep affection for the original game. Unfortunately, more than two weeks on from release, some folks who purchased the game still haven't gotten to play it. Just like Diablo III, the remastered title requires a connection to Blizzard's game servers to play, and if those servers go down, you don't get to play. 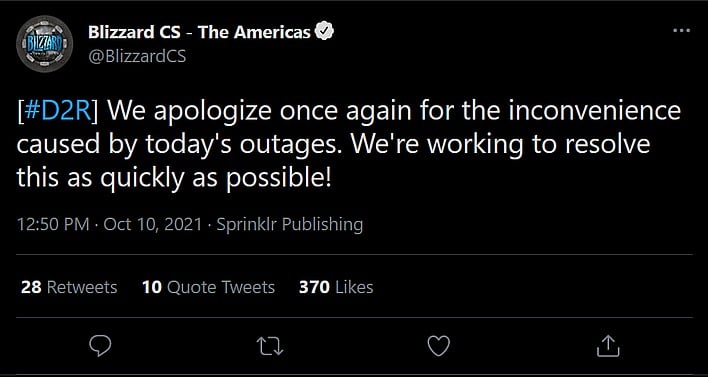 The issues have been so frequent that Blizzard has apologized repeatedly on Twitter for downtime, including "emergency" maintenance this past weekend. Replies to the tweets have been filled with angry gamers remarking that they have little time to play the title (surely due to the vagaries of adulthood) and that the maintenance is wrecking their leisure-time plans to ruin their mice with overhead-view monster hunting.

Blizzard hasn't released a statement about the downtime, but we figure that the corporation's heads are busy keeping their noses clean in the face of heavy scrutiny from multiple regulatory bodies over alleged sexual harassment scandals. If you haven't been able to play D2R yet, maybe it's finally time to try out Path of Exile?