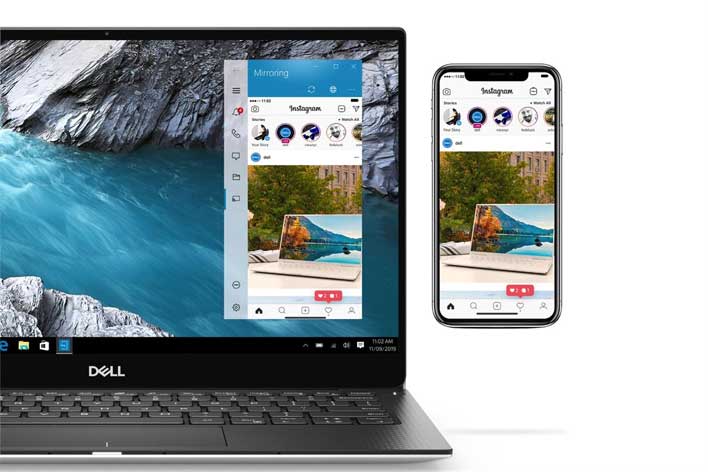 Microsoft has long offered the Your Phone app for Windows 10 PCs, which allows smartphone users to send and receive a text message from their computer and share files, among other features. However, some of the best features available for Android users are unavailable for iPhone users. Dell updated its software last month that beat Microsoft to the punch bringing similar functionality for iPhone users, while expanding Android support.

The catch is that Dell Mobile Connect was only meant to run on Dell computers. If you were using a different manufacturer's Windows 10 PC, it was possible in the past to run the app by sideloading it and manually installing drivers. Whether or not that worked varied greatly for many users. Recent updates, however, have made the process much easier thanks to a reported bug in the Microsoft Store.

The first thing to do is to open the Dell Mobile Connect app page via a web browser and then click the three dots menu located next to the Install button to remotely install the app on the computer. Should that fail because you're running a non-Dell machine, all is not lost. PC users can go to the Microsoft Store and search for the Dell Mobile Connect app. Scrolling down the Microsoft Store page for the app, near the screenshots section, there is an Install button in the overlay menu.

Clicking that button will begin the download of the app to your device. Reports indicate that by following this method, no special drivers are required to be downloaded. The app will reportedly install on many ASUS, HP, and Lenovo computers without issue using this method. Some users are asked to download drivers for calls and mirror features, while some users are reporting if the Microsoft Store method doesn't work, it can be installed by adding it to the cart, purchasing it for zero dollars, and then using the "…" Menu to install it from the library. If that fails, sideloading is still a possibility.