We've already brought you news concerning new members to Dell's XPS family, but there's also a lot of movement going on over at the company's Alienware gaming division. Alienware has announced refreshes of its desktop replacement Area-51m R2 gaming laptop and the m15/m17 R3 gaming laptops.

Given its desktop replacement status, you won't be surprised to find a mammoth 17-inch display here and Tobii Eyetracking technology. There are 144Hz and 300Hz refresh rates available for the Full HD panels, and even a G-SYNC-enabled 144Hz panel option. If pixel density is what you crave, Alienware also offers a UHD (3840x2160) panel option with a 60Hz refresh rate and 500-nit brightness rating.

Intel's desktop class Z490 chipset is featured here along with support for up to 32GB of dual-channel DDR4-3200 memory (XMP supported). There are a plethora of PCIe NVMe SSD configurations available with single drive offerings of 256GB, 512GB, or 2TB. You can also go with dual drive or RAID configurations with SSDs or HDDs.

On the graphics front, you have your choice of an AMD Radeon RX 5700M, GeForce GTX 1650 Ti, GeForce RTX 2060, GeForce RTX 2070, or GeForce RTX 2080.  Other features include a Killer Ethernet E3000 2.5Gbps NIC and Killer Wi-Fi6 AX1650i with Bluetooth 5.0. Given that gaming is the central focus of the Area-51m, Dell has reengineered the keyboard with 1.7mm of key travel, N-key rollover, and per-key RGB LED lighting. Alienware Cryo-Tech helps keep everything nice and frosty with vapor chamber cooling for the first time ever, along with a 12-phase phase HyperEfficient Voltage Regulation (select configurations). 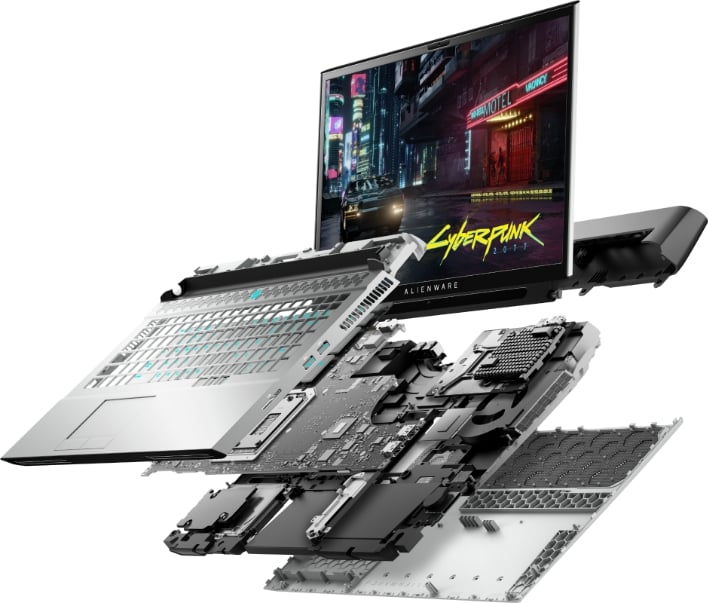 Dell includes a 90 WHr battery in the Area-51m, but we doubt that you'd want to be away from the wall outlet for too long on this beastly rig, which weighs in at 9 pounds in its lightest configuration. Maximum weight for the rig is listed at 10.4 pounds.

Dell says that the Area-51m will be available starting June 9th priced from $3,049.

Moving on, we come to the Alienware m15 R3 and m17 R3. Unlike their big brother, the m15 and m17 go with traditional laptop processors; in this case, Intel's 10th generation Comet Lake-H. Both rigs are available with up to a Core i9-10980HK processor (up to 5.3GHz Turbo Boost 2.0) and up to 32GB of DDR4-2666 memory. Single drive storage options include 256GB, 512GB, 1TB, and 2TB PCIe NVMe SSDs. There are also RAID-0 and RAID-0 Plus configurations. Those who have plenty of money to spare can go with a 4TB (2x 2TB SSD RAID-0 plus 512GB SSD) configuration, although we're scared to see the price tag for that option.

There are a plethora of GPU options ranging from a GeForce GTX 1650 Ti at the low end, and topping out with a GeForce RTX 2080 SUPER with Max-Q Design. You'll find the same network connectivity options as the Area-51m along with your choice of a 56 WHr or 86 WHr battery.

The primary difference between the two is of course the display size. The m15 comes with a 15.6-inch display, while the m17 is rocking a 17.3-inch display. The m15 offers Full HD displays with 144Hz or 300Hz panels including available NVIDIA G-SYNC. There's also a gorgeous UHD OLED panel with a 60Hz refresh rate and Tobii Eyetracking technology. The m17, on the other hand, also tops out with an UHD display, but lacks an OLED option.