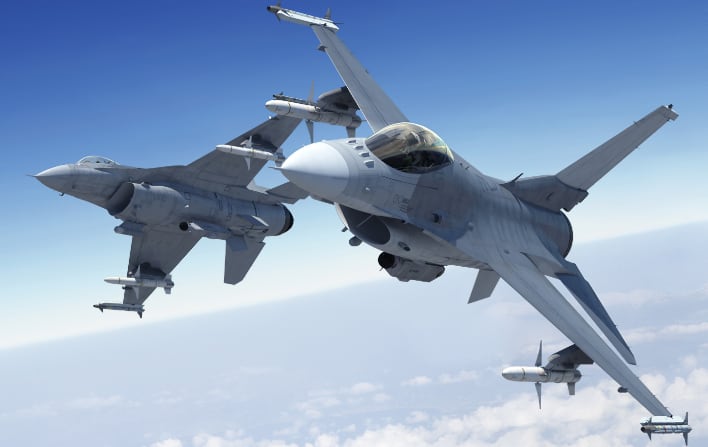 Are artificially intelligent pilots better at taking to the skies than human fliers? We are about to find out. The final competition in DARPA's AlphaDogfight trials are set to take place on August 18-20, though virtually instead of in-person because of the Coronavirus pandemic. And don't worry, nobody will be harmed in this competition (just potentially hurt egos).
Human pilots and AI opponents will not actually be flying real fighter jets and shooting one another down. The dogfights will take place in a virtual reality F-16 simulator. The matchup will culminate on the last day of the competition, pitting the top AI against an experienced Air Force fighter pilot, where virtual pride is on the line.
The original plan was to host the finals in Las Vegas, but then COVID-19 happened. Nevertheless, the show will go on.
"We are still excited to see how the AI algorithms perform against each other as well as a Weapons School-trained human and hope that fighter pilots from across the Air Force, Navy, and Marine Corps, as well as military leaders and members of the AI tech community will register and watch online. It’s been amazing to see how far the teams have advanced AI for autonomous dogfighting in less than a year," said Col. Dan 'Animal' Javorsek, program manager at DARPA's Stratetic Technology Office.

The goal of this is to demonstrate the capabilities of advanced AI algorithms, in a dogfight setting. This will be the third round of trials, with the previous two haven taken place in November 2019 and January 2020. For those, eight teams were selected.
Ultimately, this could lead to AI pilots one day joining human pilots on missions. For now, however, these trials will serve to expand a base of AI developers for DARPA's Air Combat Evolution (ACE) program, which aims to automate air-to-combat and facilitate human trust in AI systems.

"Regardless of whether the human or machine wins the final dogfight, the AlphaDogfight Trials is all about increasing trust in AI," Javorsek said. "If the champion AI earns the respect of an F-16 pilot, we’ll have come one step closer to achieving effective human-machine teaming in air combat, which is the goal of the ACE program."
You can catch videos of the previous AlphaDogfight Trials to get up to speed, then register to watch the third and final trial. Prime time viewing will take place between 1:30-3:30 pm ET on the final day (August 20).