Cyberpunk 2077 Hotfix 1.05 Patches Dozens Of Bugs Including A Fix For AMD Threading

As we noted in our Cyberpunk 2077 review, the latest creation from CD Projekt Red is a really good game at its core, with an engrossing story and interesting cast of characters that draw you into their universe. And at the same time, there are bugs. Quite a few them, actually, including one that prevents the game from taking full advantage of AMD's Ryzen processors. Good news, though—that particular bug and several others have been stomped out in the latest patch.
The inability to fully tap into AMD's simultaneous multi-threading (SMT) on Ryzen processors is one of the more high profile quirks of the game, which leaves untapped performance on the table on some PCs. Up until now, users have had to rely on their own devices to get around the issue. There emerged two main solutions. One was to grab a HEX editor and make a simple code change, and the other was to download a mod. Neither method is required at this point.
Or at least that will be the case soon. Working overtime, CD Projekt Red dropped its hotfix 1.05 patch today (Saturday), saying it is live now on Xbox and PlayStation consoles, while the PC version will "follow soon." In the mean time, the developer laid out what fixes are headed to PC. They include the following...
There are over half a dozen bug fixes for the PC alone, plus eight more geared specifically towards consoles, including improved image sharpness with Chromatic Aberration and Film Grain turned on, settings no longer resetting to default after several game session restarts, some visual anomalies have been stomped out, and more. 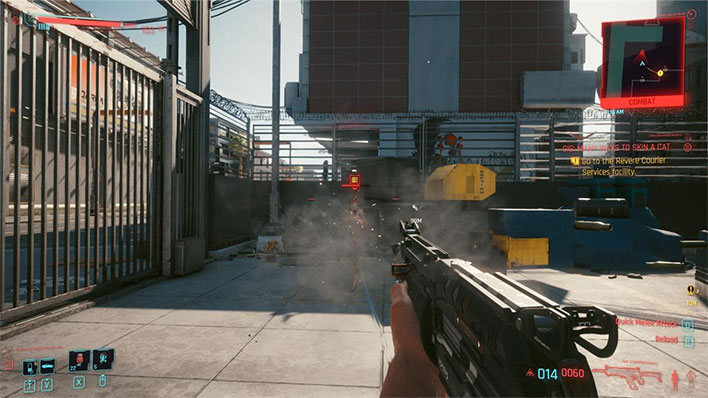 CD Projekt Red also made some gameplay improvements with the latest hotfix. For one, it claims to have improved the reaction times of NPCs taking cover. And secondly, it corrected the number of shots needed to kill civilians from a distance while in combat. These are in addition to some general stability improvements, including unspecified crash fixes.
The developer spent a bunch of time cleaning up quests as well. There are more than two dozen fixes and improvements related to quests, including an issue with Dum Dum following V after The Pickup is finished, and Jackie no longer disappearing in The Pickup or The Heist, to name just two.
In addition, there are visual improvements too. NPCs are faster to appear in the quest area during Stadium Love, Silencer icons are no longer displayed with no image in the inventory, some UI overlap issues have been fixed, and so forth.
You can check out the hotfix 1.05 release notes for the full list of fixes, changes, and improvements.