Though Cyberpunk 2077 has been delayed a few times now, we are inching closer to what should be the real launch date, December 10th. Up until now, the hype surrounding the CD Projekt Red (CDPR) game has been building, especially with giveaways and Cyberpunk-themed technology. We saw things such as a Cyberpunk 2077 OnePlus 8T and an NVIDIA GeForce RTX 2080 Ti decked out in Cyberpunk yellow. Since then, a new GPU lineup has launched from NVIDIA, and CDPR has another giveaway up its sleeve, except this one is for China-only right now.

The upcoming action-RPG game set in Night City is a beautiful looking game that will demand some decent hardware at the high end. CDPR recently updated its recommended spec sheet for Cyberpunk 2077, and you will need to get a GeForce RTX 3080 to see Night City fully spec'd in high quality with ray-traced ultra glory.

As the GeForce RTX 3080 is the new top dog for the average consumer (we're not counting the prohibitively expensive GeForce RTX 3090), CD Projekt Red has one in the Cyberpunk 2077 theme to give away. The only disappointing catch is that this giveaway is through the Chinese site BiliBili and you must register on the site to get entered into the lottery. 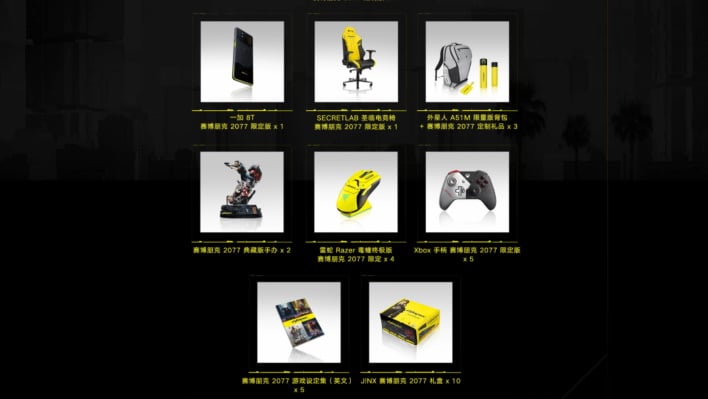 No matter what, it is still a gorgeous GPU, and we hope to see some come to the Western world soon. If we are lucky, CD Projekt Red will run a similar contest stateside, and perhaps we will see similar prizes to the Chinese contest. BiliBili users also have a chance at some Cyberpunk 2077 gear, one of the Cyberpunk OnePlus 8Ts, and other cool other stuff. If you want to see the giveaway page, you can check it out and enter here, though we hope your Chinese is up to snuff or your Google Translate skills are top-notch for this.
(NVIDIA GeForce RTX 3080 Image Courtesy of VideoCardz)