It has been a tumultuous week for cryptocurrencies as many of the major coins have taken a nosedive off a cliff, such as Bitcoin sitting at $34,000 at the time of writing. As this is happening, many crypto exchanges, like Binance and Coinbase, are feeling the pressure and may be struggling for it. Citing issues like network congestion and partial outages, these companies temporarily paused transactions, either by choice or involuntarily but have now restored some service.

Earlier this morning, Coinbase faced “intermittent downtime” on its platforms, tweeting that some customers were “experiencing some issues with logging in, seeing their balances, and trading.” The initial Coinbase outage, which lasted around two hours, has since been fixed and it is being monitored for further issues. 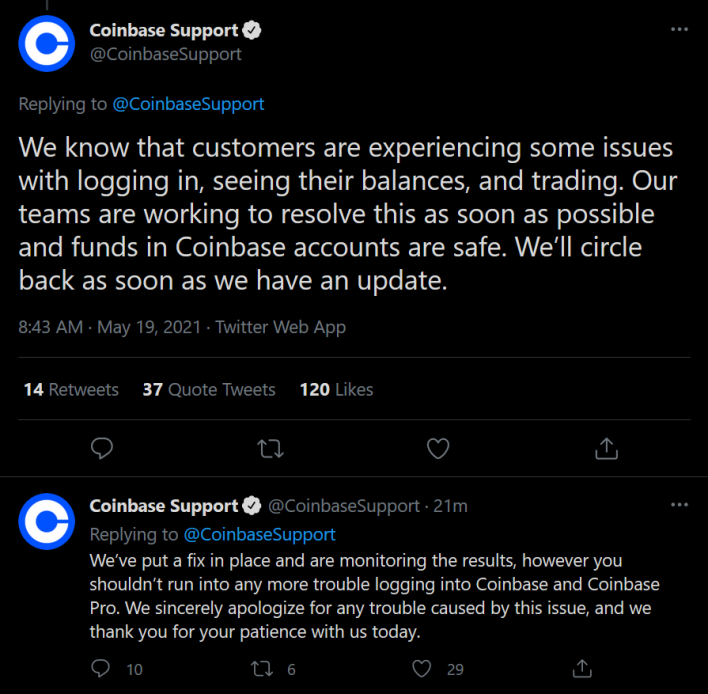 Meanwhile, both Coinbase and Binance are now experiencing issues with Ethereum and ERC-20 token withdrawals. Binance subsequently tweeted about this problem and decided to temporarily disable withdrawals due to ETH network congestion. Binance withdrawals have seemingly been re-enabled, but Coinbase is still facing problems and is investigating. 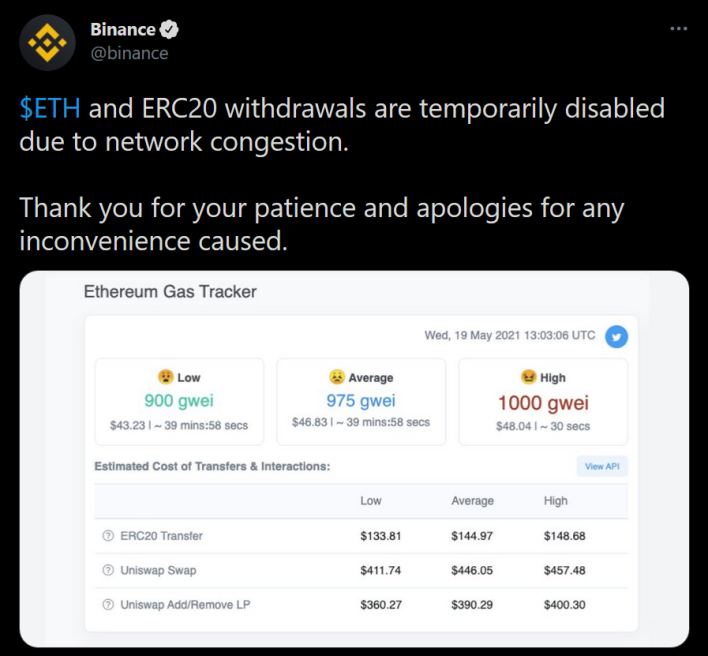 This crypto chaos comes amid a severe cryptocurrency dip in the past week, with heightened drops in the last 24 hours. This has left some of the more popular coins like Bitcoin, Ethereum, and Dogecoin dropping in value anywhere from 30 to 45 percent. It is speculated this drop is caused, in part, by Bejing banning financial institutions and payment companies from providing services for cryptocurrency, according to the BBC.

However, some believe that this dip mimics the Bitcoin market course correction in 2017 and 2018 before a slow rise to where we are now. Simultaneously, cryptocurrency mogul (or manipulator) Elon Musk has tweeted that Tesla has “diamond hands,” in reference to those who hold onto cryptocurrency no matter what.

Perhaps this dip happening is traditional market signalling and will lead to a sharp rise in price for Bitcoin and other popular cryptocurrencies while shaking off speculative buyers who are only in it for short-term investment. Of course, MasterCard and other companies are still onboard, so there is some stability in that. Whatever ends up happening, it will be interesting to watch, so stay tuned to HotHardware for updates.