It's not enough that gamers have to compete with cryptocurrency miners for an insufficient supply of desktop graphics cards, now laptop GPUs could become hot commodities for larger scale mining operations too. Providing a path to that potential outcome, a seller in China is hawking modified desktop GeForce RTX 3060 graphics cards that are actually outfitted with laptop GPUs.
There are key differences between NVIDIA's laptop and desktop GPUs, in that the specifications are not equivalent at any given model designation. However, the mobile variant of the GeForce RTX 3060 sports 3,840 CUDA cores, compared to 3,584 CUDA cores on the desktop variant. It also features the same 192-bit bus width, but wields half as much memory (6GB GDDR6 versus 12GB). 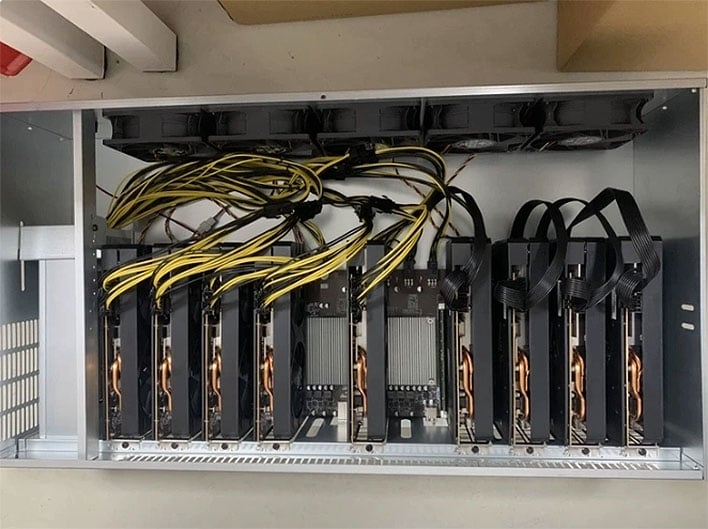 As it applies to the appeal of repurposing laptop GPUs into desktop cards, the spec that matters to miners most is the hash rate limiter, or lack thereof. NVIDIA does not include a mining performance cap on its mobile GPUs, because it's not really needed—it doesn't make sense for mining operations to purchase full-fledged laptops when all they're really after are discrete GPUs.
Assuming these modified cards are (A) real and (B) work as advertised, then the question becomes where in the heck did the seller procure all those mobile GPUs? Somehow or another, they likely got their mitts on a shipment of mobile GPUs intended for laptops, as opposed to extracting them from a bunch of laptops. Maybe, anyway.

Either way, there's some skill involved here, and it's admittedly impressive how authentic the desktop cards appear. They look like typical custom cards, minus the OEM branding, complete with a dual-fan cooling system and somewhat aggressively styled shroud. The NVIDIA stickers are not the best replicas in the world, but also not the worst.

As spotted by cnBeta, the seller posted screenshots suggesting these cards can achieve a hash rate of 50 MH/s, which is around the same as an authentic desktop GeForce RTX 3060 without an LHR designation. The seller also showed a bunch of these cards working together, hitting a hash rate of 246.8 MH/s at around 910.7W.
It appears the modified RTX 3060 cards are selling for the equivalent of around $550, roughly the going rate of authentic models on eBay.